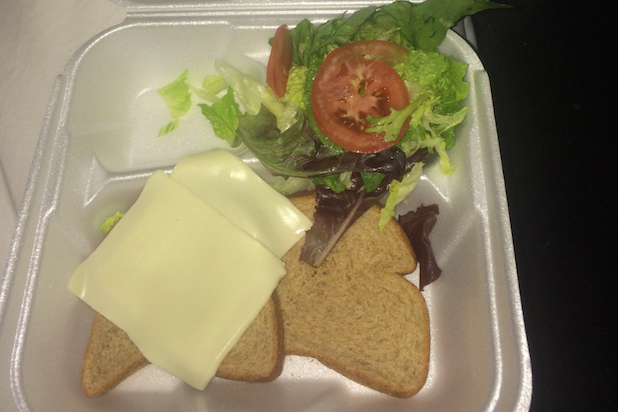 Superlawyer Mark Geragos, whose clients have included Michael Jackson and Chris Brown, can now count Ja Rule among his legal adversaries: He’s filed a $100 million lawsuit against the rapper and other organizers of the failed Fyre Festival.

As the lawsuit notes, social media was aflame Friday with images from Fyre, which was billed as a supermodel-filled music festival in paradise but turned out to be a disappointing jumble of FEMA tents, canceled performances and unappetizing food. Geragos said his client, Daniel Jung, purchased a ticket package and airfare to the festival in the Bahamas for $2,000.

Geragos included an image of bread, cheese, and salad with — brace yourself — no dressing. Attendees who tried to flee were unable to do so, the lawsuit contends. The suit also alleges that the concert was falsely billed as taking place on an island once owned by drug lord Pablo Escobar, who did not, according to the lawsuit, ever actually own the island.

The suit cited news outlets that called the event a “complete disaster” and “post-apocalyptic nightmare,” and made the same “Lord of the Flies” and “Hunger Games” jokes that many others have also made.

Geragos and his co-counsel allege that Ja Rule (real name: Jeffrey Adkins) and co-Fyre founder Billy McFarland knew full well that their festival was going to flame out but did nothing to warn attendees.

“We were overwhelmed and just didn’t have the foresight to solve all these problems,” McFarland told Rolling Stone. “Next year, we will definitely start earlier.”

Ja Rule, meanwhile, offered an apology that also served as a denial of responsibility as he promised everyone would get refunds.

“I truly apologize as this is NOT MY FAULT,” he tweeted, “but I’m taking responsibility. I’m deeply sorry to everyone who was inconvenienced by this.”