Director/writer/producer/actor/composer Tyler Perry may get the big laughs when he’s performing in drag, but he’s deadly serious when it gets down to business. Thanks largely to his alter ego Madea and name-brand awareness (‘09’s “Tyler Perry’s Madea Goes to Jail” was his biggest hit — $90 million — to date), his eight films have grossed over half a billion.

Even more impressively, Perry has achieved all this in Atlanta, where over the last few years he has built his own 200,000-square-foot studio, situated on the former Delta Airlines campus of more than 30 acres. It’s where he shoots his TV shows, including the TBS series “House of Payne,” the highest-rated first-run syndicated cable show of all time, which went into syndication after only a year, and his movies. His latest film, “Why Did I Get Married Too?” — the sequel to “Why Did I Get Married?” — again stars Janet Jackson, and here Perry talks about making the film, his part in the Oscar-winning “Precious,” his innovative TV business plan and schedule — and what he’s going to do to Spike Lee.

Spike Lee was very insulting about you, with his “coonery and buffoonery” remarks. Did you make up? 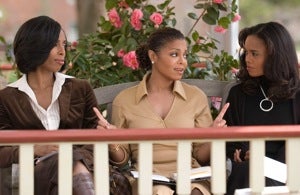 There’s nothing to make up, and we haven’t spoken. When I see him I’m gonna kick his ass! I’m joking. But I wish him well in whatever he does. But doesn’t he have something negative to say about everyone? Whoopi Goldberg to Clint Eastwood? That’s his MO, I guess.

What exactly was your role in bringing “Precious” to the screen?
I had nothing to do with the actual making of it. It was going straight to DVD, and after I saw it — and this was before any festivals or awards — I told them I’d do anything I could to help it. So I called Oprah who loved it, too, and we just decided to get behind it and push it to get it into theaters.
You wear so many hats. Any favorites?
It all depends on what I’m doing at the time.
Over the years, many filmmakers have dreamed of having their own studio, and many have tried and failed. How did you manage to pull it off?
I’ve always been the person that invests in myself, from day one. People told me what I couldn’t do on stage, but I put the money into myself, and I’m not afraid to take that bet. I broke the golden rule, which is “Never use your own money.” But I don’t mind using mine if it’s going to get me to a place where I can have the freedom to create.
So do you also rent out your studio?
We just don’t have the space right now. We’re shooting two TV shows simultaneously and going into production on two more films, and although it’s 200,000 square feet, we’ve got every corner filled with something Tyler Perry.
Sounds like you need a bigger place?
Absolutely. I just bought the adjacent 20 acres, and we just broke out the plans for a $100 million expansion. I hope to start on that after the summer, when both films are done.
You shot 46 episodes of “Payne” in just three months. How do you manage that?
We shoot an episode a day, and I’ve now got about 340 episodes in the can, between “House of Payne” and “Meet the Browns.” It’s a whole different system from Hollywood. I remember a friend was in a sitcom once, and I sat there on the set for 12 hours, three days in a row, and they never once taped the show. I just thought, what a waste! I just figured out a better business model on my own.
You’re a big success story now. What was your lowest point before things turned around?
Probably being homeless in ’92, ’93, then again in ’98 right before things took off. I was 28, and I decided to burn my work and walk away. I’d love to read some of that stuff now, but it’s all gone.
Tell me about “Married Too.”
You don’t have to see the first one to see the sequel, as they stand alone. It’s about four couples who explore the whole thing of why they got married, and being in paradise they realize they’re living in hell. So it’s about relationships, life, love, forgiveness — a lot of different things.
Was it hard getting all the same cast back?
Not at all. After we did the first one, everyone wanted to do a sequel, but I wasn’t quite sure. I wanted to hear what the characters had to say — once they spoke up to me and I was able to write the script, it was a no-brainer. These are pretty easy for me to write — I’ve had five relationships in my adult life, and I can draw on lots of experiences for these characters – both male and female.
It must have been very difficult for Janet Jackson, after her brother’s tragic death?
Yeah, it was very, very difficult, but I was glad we were working together as I had an opportunity to see her every day and do everything I could to protect her and help her get through a very tough time. It was pretty tense for a while, but then she also used everything she was going though and put it on the screen.
x
Looks like you're enjoying reading