It may only be February, but it’s already time for the first of three Marvel Cinematic Universe movies in 2018. “Black Panther” is the last Marvel movie before this summer’s teamup to end all teamups, “Avengers: Infinity War.”

Of course, it’s important for far more than just that reason — “Black Panther” is the first mega-budget blockbuster ever to feature a cast made up almost entirely of black actors. Chadwick Boseman headlines as the titular hero, and the supporting cast is spectacular, with Michael B. Jordan as the villainous Eric Killmonger alongside Lupita Nyong’o, Danai Gurira, Sterling K. Brown, Forest Whitaker, Angela Bassett, Letitia Wright, Daniel Kaluuya and many others.

Clocking in at a robust 140 minutes, “Black Panther” is a movie that will test the limits of your bladder if you grabbed a large beverage at the theater. And so once the credits roll you may feel a strong urge to head to the bathroom and want to know if you’re going to miss anything by doing so. And so here’s the skinny.

“Black Panther” contains two extra scenes after the credits start to roll. The first comes early in the credits, about a minute or so in. And the second comes at the very end of the credits. There’s about a five minute gap in between the two, so you probably will have time to run out and come back if there’s not like a long long at the bathroom.

Thus concludes the spoiler-free portion of this post. If you don’t want to know any of the details of the post-credits scenes in “Black Panther,” now’s the time to bow out.

Here’s a cool shot from the movie to act as a buffer. 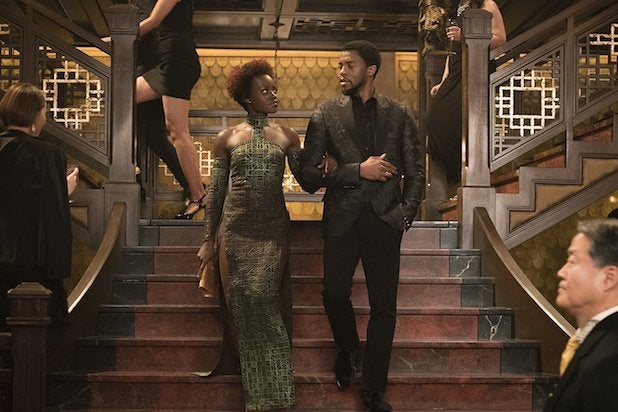 The first of the two scenes is sort of a bonus ending of the movie. T’Challa is addressing the United Nations, declaring Wakanda’s intent to, for the first time, work with other countries in order to make the world a better place, following up on the outreach center he’s planning to set up in Oakland. At the end of T’Challa’s address, some smarmy white guy pompously asks how a nation of farmers is going to be able to contribute anything meaningful. At which point all the Wakandans in the room smile wryly.

The scene at the end of the credits gives us an update on the status of one Bucky Barnes (Sebastian Stan), who at the end of “Captain America: Civil War” was seen being put into what appeared to be cryogenic stasis in Wakanda. But now he’s out and awake, still in Wakanda, hanging out in a hut in one of the rural areas of the country. T’Challa’s sister Shuri (Letitia Wright) pays him a visit, running off the three children who seemingly like to lovingly bother Bucky while he sleeps — and those children call him by a new nickname: White Wolf. It’s a significant thing — White Wolf is a Marvel character, but not one associated with Bucky.

In the comics, White Wolf is a white man named Hunter whose family died in a plane crash in Wakanda when he was a boy. White Wolf was the head of Wakanda’s secret police, the Hatut Zeraze, under T’Chaka. T’Challa abolished the organization when he took the throne, which led to an estrangement between him and the White Wolf, who then became a mercenary.

It’s unlikely that Bucky’s arc from here will follow that of the comic book White Wolf in any meaningful way, the title instead carrying a symbolic parallel — that of a favored adopted son of Wakanda. Since, according to the trailer for “Avengers: Infinity War,” we’ll next see Bucky defending Wakanda from the forces of Thanos, that thought follows.