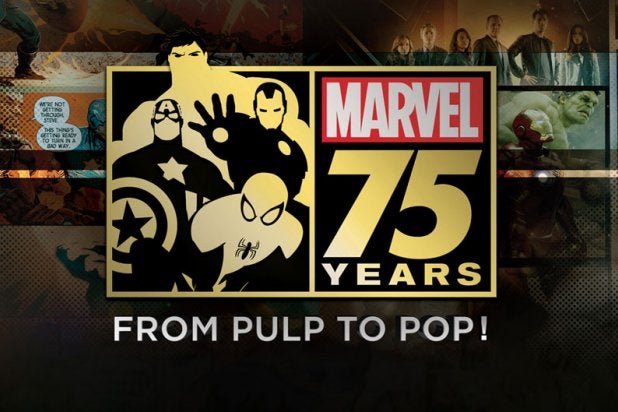 A documentary looking back at the company behind the biggest film franchise of all time is coming to ABC. Airing Tuesday, Nov. 4 at 9 p.m. ET, “Marvel: From Pulp to Pop” will explore 75 years of Marvel Comics, from its genesis in 1939 through to its explosive box office clout today.

See video: Robert Downey Jr. Hints That Someone Else May Wear the Armor for Fourth ‘Iron Man’ Movie

“Revenge” star Emily VanCamp, who also portrayed Sharon in “Captain America: The Winter Soldier,” will offer exclusive interviews through the decades with the talents that brought to life some of the world’s most recognizable characters.

From the X-Men franchise to Spider-Man and the Avengers, Marvel Comics is home to some of the most iconic and popular superhero characters in the world. With successful film franchises at Sony (Spider-Man), Fox (X-Men) and Disney (Avengers), Marvel is absolutely dominating the blockbuster business.

And then there’s “Marvel’s Agents of SHIELD.” on ABC, and the upcoming series of interconnected shows on Netflix including the likes of Daredevil, Iron Fist, Luke Cage and Jessica Jones.

All of those characters that are wowing moviegoers and TV viewers alike got their starts in the pages of Marvel Comics throughout the last 75 years.

Whether it was Captain America in 1941 fighting the good fight in World War II, Peter Parker getting bitten by a radioactive spider in 1962, or the latest iteration of the Guardians of the Galaxy in 2008, Marvel Comics is where all those ideas were born.