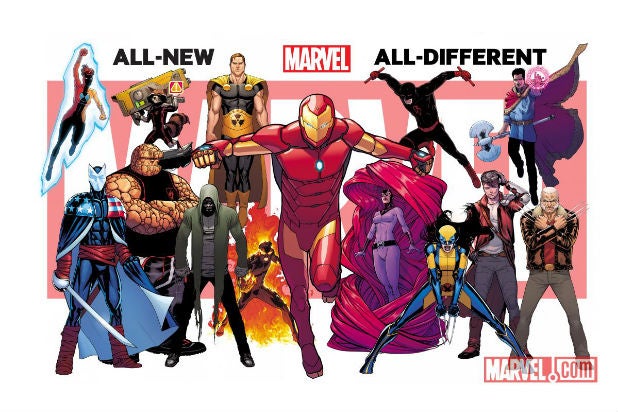 Marvel will reset all of its comic books this fall in a relaunch initiative dubbed “All-New, All-Different Marvel,” with possible implications for the company’s cinematic universe down the road.

According to Mashable, the relaunch will revert all of the publisher’s comic books to No. 1s, with new creative teams and new storylines for all titles. New characters will be introduced, while existing characters will receive significant changes.

Among the developments teased in new images released by Marvel (see above and below) are an aging Captain America and Wolverine, a separate female Wolverine likely inhabited by Logan clone X-23, the Fantastic Four’s Thing as a member of Guardians of the Galaxy and two versions of Spider-Man.

Also Read: David Oyelowo on Potential Ava DuVernay Marvel Movie and Whether He Would Ever Play a Superhero

“We’ve been planning it for years,” said Marvel Editor-in-Chief Axel Alonso of the new initiative. “We realized that would be a game-changing moment that would allow us to create a big white canvas. It’s an unprecedented chance for us to tell new stories across all titles with new No. 1s.”

The reboot will come after the conclusion of Marvel’s massive summer event “Secret Wars,” which promised to destroy the Marvel universe when it was announced last year. The event is seen as a means of folding the company’s alternative “Ultimate” universe, which is being eliminated, into the main universe with which most are familiar.

It’s from the Ultimate universe that many of the storylines and character directions of Marvel’s cinematic universe have been mined, providing the primary fuel for speculation several months ago that the next movie Spider-Man might be something other than white; the Spidey of the Ultimate universe is black-Hispanic Miles Morales, presumably the second Spider-Man pictured.

But while the “All-New, All-Different” initiative will bring significant changes, Marvel promises it will not be completely unfamiliar to longtime readers.

“There’s no red sky, there’s no icecaps,” Alonso said. “But there will be new places on the map, there will be new characters that were just too cool to not bring back from ‘Secret Wars.’ There are new teams that are necessary to deal with new threats.”

The new No. 1’s will be staggered throughout the fall, over a period of three to four months.