“WandaVision” may have predicted the release date for the “Spider-Man: No Way Home” trailer, but there’s one other aspect of the series that fans are latching onto again: Mephisto.

For months, people speculated that the iconic Marvel villain Mephisto was actually the secret figure pulling the strings in Westview. But by the end of “WandaVision,” he never actually showed up. It’s become a bit of a joke on the Internet in the months since, with people joking that any unknown presence in the MCU now is immediately Mephisto.

But after the “No Way Home” trailer, some more serious theories are starting to resurface. The most popular one centers on the idea that Doctor Strange himself is Mephisto because he seems to be willingly casting a massive spell for Peter Parker.

“Listen…listen, I know nobody wants to hear this, and it’s become a joke on the internet…however. There’s something to be said about Dr. Strange being so reckless and frivolous with his magic,” one person tweeted. “100% out of character and very suspicious. So it looks to me that…it’s Mephisto, bb.” 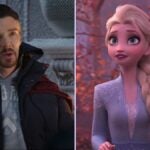 Others latched onto one particular shot from the trailer, where a Spider-Man protestor holds a sign bearing Peter’s face, graffitied with devil horns and a mustache, and captioned “Devil in Disguise.” (In the comics, Mephisto is literally the devil). But most people seem to think this particular shot was more of a clue about Strange, rather than Peter himself.

Many seem to think that “No Way Home” will be the MCU’s loose adaptation of “Spider-Man: One More Day,” a series written by J. Michael Straczynski and Joe Quesada in 2007.

In it, Spider-Man encounters Mephisto, who offers to save Aunt May’s life after she was shot, but only if Spider-Man gives up his marriage. But that doesn’t mean hand over Mary Jane Watson herself. Instead, the marriage part of their history is effectively erased, made so that it never happened at all.

It does sound similar to what seems to be happening in “No Way Home,” with Doctor Strange’s spell erasing the moment that Mysterio outed the teen hero’s identity, but also erasing any knowledge that Peter’s friends and family had of his identity prior to the Mysterio incident. But until the movie actually comes out, there’s no way to know for sure.

So, in the meantime, you can check out some Mephisto theories and hopes below.