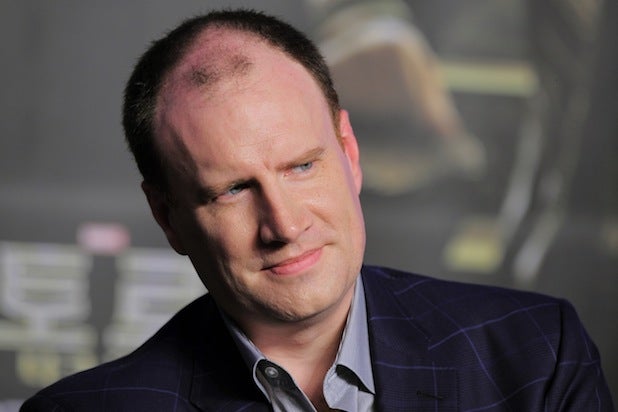 Did someone slip Kevin Feige a mickey in London?

The head of Hollywood’s most notoriously secretive studio was in a chatty mood in the U.K. this weekend, where he sat down with the junket press to talk about “Thor: The Dark World.”

He didn’t divulge that much – but for the air-tight Feige, it was a relative avalanche of teases and updates, starting with the studio president’s own job status.

Here’s an accounting of everything he divulged so far:

>>On Feige’s contract with Marvel: Our friends at Collider asked Feige about his contract several months ago, at which time he said he was definitely on through Phase Two (which concludes with “Avengers: Age of Ultron”). This time, he replied:

“I think it’ll be a while. At least through the next phase or so.”

That means Feige believes he’ll be on through Phase Three, which concludes roughly in 2018 with the release of Avengers 3 (reps for Marvel/Disney didn’t have an immediate answer when contacted by TheWrap on his status). Feige has made it clear that Marvel movies are planned through 2021, so if you like what you’ve seen so far from the Marvel Cinematic Universe, that’s good news indeed.

With Feige’s status apparently secure, he dropped a few hints about the studio’s upcoming projects:

>>“Avengers: Age of Ultron”: The main baddie in the Avengers sequel is a malevolent robot who hasn’t revealed much personality in years of comic-book appearances, but for the film, he’ll be a whole different bucket of bolts. Feige told the Huffington Post that James Spader will more than just voice the villain:

“Well, I think it will be more than a voice role — we’ll be capturing his face and his body to create a whole performance. He’s a very unique and incredibly exciting and unpredictable actor. And Ultron in the comics is a robot, but what’s cool about him in the comics — and certainly how Joss Whedon is interpreting him for the movie — is that he is much more than just a robot. That he’s infused with much character. And I don’t want to say too much, but you can imagine James Spader will be very dynamic in his portrayal of this character. … We did not hire James Spader to do a robot voice.”

>>Daredevil and Punisher: When Bleeding Cool got its turn at the junket buffet, it asked Feige about a pair of Marvel characters who have recently come back into the fold (Daredevil had been at Fox, which made the disastrous 2003 Ben Affleck version; rights reverted to Marvel after they chose not to develop a reboot. Punisher rights came back to Marvel earlier this year after middling films in 1989, 2004 and 2008).

“We’re trying to figure out what to do with Daredevil now. Punisher could show up at one point. You know, once we get characters back into the Marvel fold we don’t want to do something right away, we want to do the smart thing at the smart time.”

So there you have it. Be happy, nerds: that’s about as candid as Feige’s going to get when it comes to Marvel Studios’ plans.