Marvel Studios is developing a “Nova” project based on the character Richard Rider, according to an individual with knowledge of the project.

“Moon Knight” writer Sabir Pirzada is attached to write. It is currently unknown if “Nova” is being developed as a feature, or as a Disney+ series.

Who is Richard Rider? Better known as Nova, he’s a member of the intergalactic police force known as the Nova Corps — sort of, kind of Marvel Comics’ version of the Green Lantern — who has crossed paths with the Guardians of the Galaxy, Captain Marvel, and Thor. He was created by Marv Wolfman (who among other things also co-created Blade) and John Romita Sr. (who also co-created The Punisher). 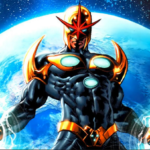 Nova was in earlier drafts of the “Guardians of the Galaxy” screenplay but ended up getting cut.

“Nova is… if we have a big board with a bunch of characters that have more immediate potential, Nova is on that board,” Marvel Studios president Kevin Feige told ComicBook.com in 2018. “Because of the connection to the Guardians universe, because there are more than one examples to pull from in the comics that are interesting. And you’re absolutely right, he was in the earliest drafts of the [Guardians of the Galaxy].”

Pirzada most recently was part of the writer’s room on Disney+ series “Moon Knight,” which premieres on March 30.

Pirzada is repped by 3 Arts.