The cast of Prime Video’s “Marvelous Mrs. Maisel” is growing in its final season.

Kelly Bishop, Alfie Fuller and Jason Ralph will be returning for Season 5, the streamer announced Wednesday.

“Gilmore Girls” alum Bishop, who plays Benedetta, returns as a guest star, while Fuller, who plays Dinah Rutledge, and Ralph, whose character is Mike Carr, will be series regulars for the final season. 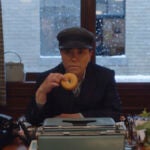 Amy Sherman-Palladino created the show and executive produces with Daniel Palladino. The pair both write and direct the series.