Season 4 of Prime Video’s hit series “The Marvelous Mrs. Maisel” premieres on Friday, with the first two episodes of the season. Because of the pandemic, it’s been more than two years since we’ve seen Midge, Susie, and the family. So, here’s what you need to know heading into season four.

Really, a whole lot happened in Season 3 of “The Marvelous Mrs. Maisel.” Midge (Rachel Brosnahan) mostly saw roaring success with her comedy gig, as she went on tour, opening for Shy Baldwin. They were even set to head overseas — until Midge shot herself in the foot.

In the season finale, Midge landed herself a primetime spot at the Apollo. But, instead of her typical stuff, she’s encouraged to poke a little fun at Shy himself. Of course, it became way more than a little. In her set, Midge riffs on his flamboyant clothes and nature, and outs him as a gay man to the crowd. 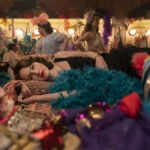 Also Read:
‘The Marvelous Mrs. Maisel’ Renewed for Fifth and Final Season Ahead of Season 4 Premiere

The crowd itself didn’t fully process that fact, considering it’s the 1960s, but Shy Baldwin certainly got her jokes, and kicked her off the tour, leaving her on the tarmac at the airport. And that’s just her professional woes.

Personally, Midge is also struggling. Thanks to Susie’s gambling problem, Midge loses the money she had planned to use as a down payment on her old apartment — but she doesn’t know that yet. Of course, she was going to use her contract with Shy Baldwin as collateral as well, and that’s gone too.

Her ex-husband but still kind-of-a-fling Joel — the two had a one night stand at the end of Season 2 and nothing after that but you can never really count him out — is now managing her money, instead of Susie. 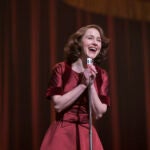 But wait, he’s into some shady dealings now too. Last season, Joel bought himself a club, only to realize later that he got it so cheap because there is an illegal casino being run underneath it. He doesn’t rat them out though. Instead, Joel enters into a relationship with Mei (Stephanie Hsu), who helps run the place.

Essentially, Season 3 dropped Midge and Susie back at square one. Season 4 will be all about figuring out where to go from here.

Now, if you still feel like you’re missing anything, you can check out some key moments from “The Marvelous Mrs. Maisel” Season 3 in the video above.