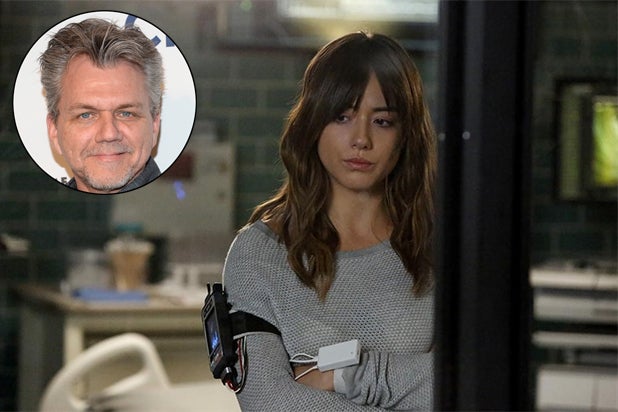 “Marvel’s Agents of S.H.I.E.L.D.” returns for the action-packed second half of Season 2 on Tuesday, after a three-month hiatus. The new episode, fittingly titled “Aftershocks,” picks up where the cliffhanger left off, with Skye (Chloe Bennet) developing awesome superpowers and Agent “Trip” Triplet (B.J. Britt) dead.

“We like it when you have feelings. If we can make you feel both sad and happy at the same time, then we’ve done our job,” executive producer Jeffrey Bell told TheWrap during a discussion about Tuesday’s episode, last year’s brutal midseason finale and where the superhero series is headed from here.

The veteran TV producer (“Angel,” “Spartacus”) said packaging the good with the bad helps provide a maximum effect: “Skye gets a power, something really cool has happened and you feel the happy emotions. But at the same time it comes with a price — the death of Trip — which is sad. We thought those together were pretty amazing,” he added.

Bell also discussed Phil Coulson’s (Clark Gregg) reaction to the devastating loss of his team member, how Adrianne Palicki and Nick Blood have helped round out the cast on Season 2 and how he believes Marvel’s fill-in series “Agent Carter” may have helped sustain viewers over the long hiatus.

TheWrap: The cliffhanger you wrote was heartbreaking. How’d you guys pull off that powerful last scene?
Executive producer Jeffrey Bell: The way B.J. and Chloe played it at the end is really the key. Michael Zinberg’s direction, the score, it was fantastic. The look on his face and her face as he’s crusting over… For us it was very emotional.

How will Trip’s death affect Skye going forward?
One of the advantages of telling an origin story over multiple episodes is you have time to play through a bunch of different feelings. In a movie, a character loses his wife, daughter or best friend and has just a moment to be sad before going off and killing 50 people. There’s no time for grief or feelings or processing what it means. But on the show we have time for to develop that … Skye is still not clear about exactly what happened down there. She has to figure it out. The team has to figure it out.

So, the ripples of his death will play out over multiple episodes?
Yeah. It’s an awesome process. It gives us a chance to explore her characters’ different colors.

What else can we expect?
Well, Skye wasn’t the only one down there when it happened. Raina has been affected, too. She’s undergone her own changes, which are cool, and how it plays out is exciting.

We have Skye’s dad who is very much around and a big part of where we’re going. We have Ward who stumbled out with Agent 33, and the promise of something new there. We also have Coulson who, as the leader, feels responsible for what happened. He is very angry at Hydra. Very angry about everything.

Can you talk about what the new cast additions have brought to Season 2 thus far?

I joke that our biggest special effects this season are casting. …. We spent a lot of time maturation into SHIELD agents last season. Nick Blood and Palicki have been a real help to our show and have bridged the gap between the [younger agents] and Agents Coulson and May, who have been around a long time. Mack and Hunter and Bobby fit in there nicely for us. The fact that have a history on their own gives the show a lot more depth. They have been terrific additions.

Do you think ABC going with “Marvel’s Agent Carter” over your show’s hiatus helped keep comic fans engaged over the months-long gap?
We’ll find out [Tuesday.] It was a cool idea to keep the Marvel brand and story going in that time slot, so that the habit doesn’t get lost. When you go away for that long, the fear is people will forget about you, especially when there’s so much out there. I think it was a great idea, and I hope it helps.

See a trailer for the new episode below.

“Marvel’s Agents of SHIELD” returns to ABC on Tuesday at 9 p.m.

Lucy Lawless, Adrian Pasdar and “Agent Carter’s” Hayley Atwell are featured with the show’s regular crew of superhero-loving scientists and spies in images from the ABC show, which returns Tuesday, Sept. 23