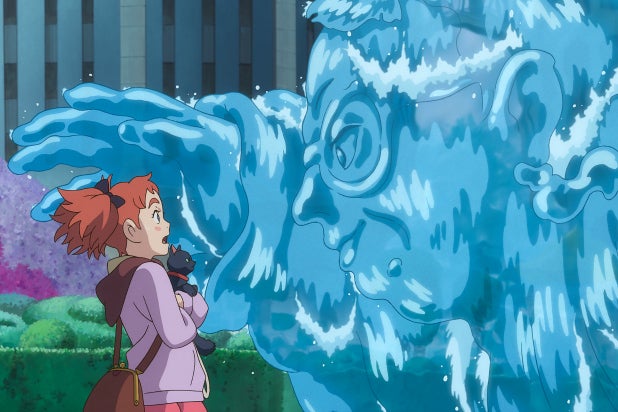 A lovingly crafted fantasy on an epic scale, “Mary and the Witch’s Flower” is a film about transformation made by filmmakers in transition.

Directed by Studio Ghibli veteran Hiromasa Yonebayashi (2015 Oscar nominee for Ghibli’s “When Marnie Was There”), this action-packed tale of a young witch coming into her power is the first feature from Studio Ponoc, the aspiring animation powerhouse headed by longtime Ghibli lead producer Yoshiaki Nishimura (Oscar nominee in 2014 for producing Ghibli’s “The Tale of Princess Kaguya”).

Yonebayashi and Nishimura have based their film on Mary Stewart’s 1971 YA novel “The Little Broomstick,” a storybook the six-year-old J. K. Rowling must have found in her Christmas stocking. In the movie version, awkward but plucky schoolgirl Mary (voice of Ruby Barnhill in the GKIDS English language dub) encounters an old broom and an enchanted flower deep in a British forest. Red-haired Mary plucks the flower and is given awesome but temporary powers when its nectar spills on her hands.

Mary is in no way prepared to be a spellcaster, first class, as becomes apparent when her little broom comes to life and whisks her away to the frothily surreal campus of a secret magic academy. There the evil headmistress Madame Mumblechook (Kate Winslet, clearly having a ball) spots Mary using her temporary powers and mistakes her for a witching prodigy.

When Mumblechook realizes Mary is a fake, she plots with her mad scientist sidekick Doctor Dee (a deliciously fatuous Jim Broadbent) to harness Mary’s flower power for evil and reshape the world. Or something like that. It’s never entirely clear what Mumblechook and Dee are up to, though it seems to involve transforming the human race into magical butterfly people. Whatever it is, it’s bad, and brave Little Mary and her best pal Peter are the only ones who can stop them, in a war of magic vs. goodness that finds just the right balance between big action set-pieces and “Alice in Wonderland” whimsy.

Also Read: DVDs are Dying, But Not for Anime Distributor Funimation

By lavishing his considerable design skills on a world equal parts Hogworts and steampunk sci-fi, Yonebayashi recalls the great French animatior Paul Grimault’s masterpiece “Le Roi et L’Oiseau,” which also recast fairytale tropes for the machine age. Yonebayashi’s visual imagination seems limitless. Mumblechook’s magic academy brims with so many strange creatures and ectoplasmic oddities, it’s a strain trying to catch them all. The tentacled and legless Doctor Dee’s broken cybernetic form conveys his entire backstory as a reckless obsessive whose failed experiments cost him spectacularly in the past.

Ponoc (the name is Croatian for “New Day” or “Zero Hour”) was founded after Studio Ghibli dissolved its production department in 2014, and many of its staff are Ghibli veterans. The Ghibli comparisons are inevitable, and they may even be welcome; producer Nishimura has repeatedly stated his goal as preserving Ghibli’s role in creating first-rate family fare.

But despite its strong female protagonist and a “concerned” subplot about animal experimentation, “Mary and the Witch’s Flower” owes more to MGM’s escapist classic “The Wizard of Oz” than it does to “Kiki’s Delivery Service.” Though Ghibli founder Hayao Miyazaki enjoyed wild success, he’s still a fundamentally personal filmmaker, who populates his fantastic worlds with flawed heroes and a deep skein of pessimism about human motivations untypical in mainstream animated fare.

It diminishes “Mary and the Witch’s Flower” not at all to call it the work of a more straightforward fantasist. Yonebayashi’s unwavering faith in the clear values and direct narrative structures of a good storybook energize his rousing entertainment with sweep and drive.

Ponoc and Yonebayashi have managed the difficult task of demonstrating an older tradition’s durability while making a film that speaks for itself. Though Miyazaki has recently announced he will come out of retirement to make yet another “final film,” the Ghibli torch seems to be passing. If “Mary” is an indication, Ponoc looks to be just the company who will use it to make a fire of its own.