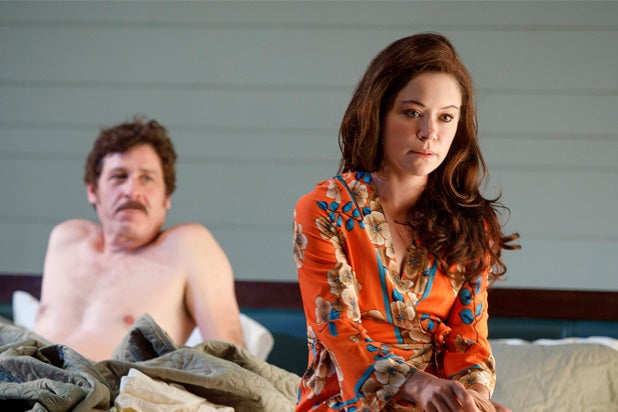 Whoever thought that Tracy Letts would write a play that brings to mind Oliver Stone? Remember that risible moment near the end of “Wall Street” when Martin Sheen tells Charlie Sheen that going to prison might be the best thing for him?

Prison, as it turns out, is the best thing that ever happened to the title character in Letts’ new play, “Mary Page Marlowe,” which opened Thursday at Second Stage’s Off Broadway venue.

After a stint in the pen, the lovable and old Mary Page Marlowe (Blair Brown) bears absolutely no resemblance to her younger pre-jailbird self, who in the course of the play goes from being a crying baby to an emotionally abused adolescent (Mia Sinclair Jenness) to an ambitious coed (Emma Geer) to an analysand and serial philanderer (the excellent Tatiana Maslany) to a divorcee with kids (Susan Pourfar) to a chronic alcoholic (Kellie Overbey).

Letts uses the chronologically jumbled structure of David Hare’s “Plenty” to tell the life saga of Mary Page, who in one defiant moment insists on just being called Mary. Much of the dramatic tension hinges on when in a vignette Letts will drop the name Mary or Mary Page to let us know which actor on stage is the title character.

Tellingly, he saves an early childhood moment and puts it late in the play. At age 12, Mary Page is preparing to sing in a school performance and her incredibly caustic mother (Grace Gummer not playing against type) tells her daughter the truth: She can’t sing. Not only does Mary Page lack talent, mom says, but the world is a rough place.

Speaking of Freud, about a third of the way into this 90-minute drama, there’s a scene with a psychiatrist (Marcia Debonis), identified in the program as Shrink, in which we learn that Mary (this is when she briefly drops her middle name) doesn’t feel she has control of her life, the choices she makes aren’t hers or, if they are, they don’t make any difference regarding the outcome.

It doesn’t say much for Letts’ dramaturgy that he needs a psychiatrist to reveal his title character’s psychology. What Letts does not include is a scene in the penitentiary that would tell us how the often edgy and out-of-control Mary Page Marlowe morphs into the downright adorable Blair Brown. On the eve of her incarceration, Mary Page (back to using both names) tells the second of her three husbands (David Aaron Baker) that she’d prefer going to the state penitentiary, rather than the county jail, because “they have programs, work programs, recreation. Counseling. County is just a lock-up.”

When did shrinks in prison become so much more effective than the ones you pay for on the outside?

Lila Neugebauer’s direction makes little attempt to link the various actresses playing Mary Page Marlowe, most of whom resort to broad effects to quickly establish their big moment in the character’s life story.

In this cast of 18, none of the other actors are double cast. That’s a production luxury in modern theater that here serves only to emphasize the general lack of dramatic cohesion. Only Maslany creates genuine intrigue with her no-nonsense and very efficient Mary Page, who sleeps with her boss (Gary Wilmes) in a hotel and has no interest in repeating the encounter.