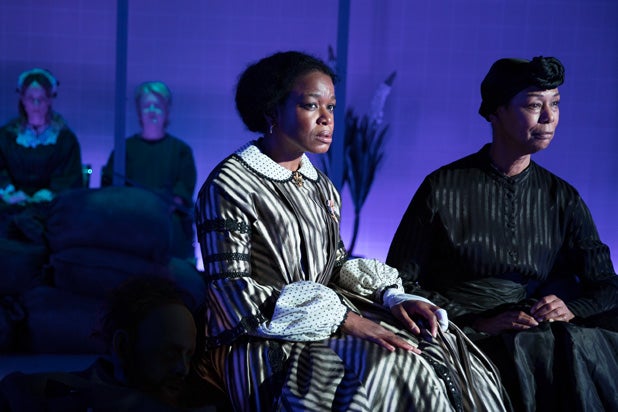 Mariana Sanchez’s very mutable set begins as a hospital room, but before anyone gets the idea that you’re in for another of those ponderous deathbed dramas, you should know that Drury will eventually take us to a battlefield in the Crimean War, where the real-life Mary Seacole and Florence Nightingale carried out their own personal war to nurse the British soldiers there. (Seacole remains a controversial figure. Her statue in London continues to inspire protests from Nightingale’s fans.)

We’ll also witness a staged trauma rehearsal in a modern hospital that the fictional nurse Mary manages with slapstick panache. Both Marys were born in Jamaica, and are played in grand style by Quincy Tyler Bernstine, giving the performance of this winter season in New York City.

Drury keeps switching the story between the two Marys, who appear to be in direct communication with each other a 100-plus years apart. They wear identical earphones. Bernstine manages the time lapses seamlessly, and is immeasurably aided by Lileana Blain-Cruz’s direction, which is both over-the-top and precisely what a big saga like “Marys Seacole” requires (despite its 90-minute running time.

Sitting through this version of the Crimean War in the tiny Tow Theater, you feel like you’ve visited a battlefield — and that doesn’t include the verbal fireworks between Seacole and Nightingale (Lucy Taylor, being comically condescending).

There are also quiet moments that expose a more seasoned sense of humor. The modern Mary and her younger Jamaican nurse friend Mamie (Gabby Beans) are minding their own business during a hospital break when a new mother (Ismenia Mendes) with a baby carriage feels the need to unload her problems on them.

Sitting there on the park bench, Mary doesn’t say much; her expressions and gestures do all the talking as she cautions Mamie not to get involved with this person from the white world. It’s trouble. Mary and Mamie embody those caregivers you see on the streets of New York City, attending other people’s grandparents, and you wonder, who’s caring for their grandparents? It’s a dilemma Cruz makes abundantly clear with the play’s final tableau.

As written by Drury, neither Mary is a saint. The modern Mary’s tough façade probably doesn’t make her the greatest caregiver the world has ever seen. And far more curious is Drury’s portrait of the real Mary, who can’t stop talking about her mixed heritage and the strong Scottish blood coursing through her veins.

A powerful visual leitmotif in “Marys Seacole” is the real Mary’s mother, who rarely leaves the stage or stops walking. She doesn’t say anything, but Karen Kandel makes her an awesome, towering presence. When she does finally open her mouth, it’s to rant: What’s her daughter doing caring for all those white people?

The Jamaican accents here are very pronounced, and not everything was unintelligible to these ears. Suffice to say, the ensuing spectacle of two titanic actors ripping into each other makes riveting theater, like hearing a great opera duet even when you don’t know the language being sung.