This week’s “Masked Singer” does not end in an elimination, as the hourlong installment instead pulls double duty as the Season 5 singalong special and the show’s first-ever “Masky Awards.” TheWrap has an exclusive sneak peek of the episode, which features the returns of already unmasked contestants, including Kermit the Frog and California governor hopeful Caitlyn Jenner, who are back to accept their Masky — and to Rickroll fans.

In the clip, which you can view via the video above, the eliminated Season 5 contestants come together for a montage in which they sing Rick Astley’s “Never Gonna Give You Up” in their show costumes. Unfortunately, they did have to give those costumes up, but they clearly don’t want to and they definitely don’t want to let their “Masked Singer” fans down. 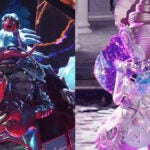 Also Read:
‘The Masked Singer’ Reveals 2 Contestants in Double Elimination: And Crab and Seashell Are…

The singalong Maskys also feature the continuing contestants who are still in the running for Season 5’s Golden Mask trophy: Russian Doll, Robopine (f.k.a. Porcupine), Yeti, Chameleon, Black Swan and Piglet. Those six will return to compete next week for an episode that will end in an elimination.