It appears to be ’90s week on “The Masked Singer.” During the Round 3 Finals on Wednesday, both Space Bunny and Queen Cobras were eliminated from the competition.

Queen Cobras was revealed to be R&B group En Vogue, while Space Bunny was none other than Shaggy. The judges were on a roll this week, managing to guess the correct identities for each before they were unmasked.

Shaggy was the first to go home after his performance of “Now That We Found Love.” Before he was revealed, judge Robin Thicke managed to correctly guess that he was behind the cuddly astronaut costume (other guesses from the judges included Sean Kingston and, weirdly, Owen Wilson). In all honesty, the reggae singer told TheWrap he wasn’t too surprised that the judges were able to figure out his identity — and he actually expected it sooner. 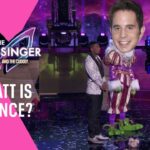 “It took too damn long! With the exception of Jenny McCarthy, I know all of them. Nicole [Scherzinger] and I make records together. She’s been at my house in Jamaica, you know, hanging out at my parties. I mean, they should have guessed a long time ago,” he said, adding that his song choices are probably ultimately what gave him away. “In hindsight, I probably didn’t make the best choices because I was doing it more on a patriotic kind of a vibe. They were all Caribbean or Jamaican. I should have stuck with my original plan. I was gonna sing like Neil Diamond and Frank Sinatra. In fairness to the songs, they were really fun songs, got people going but it also gave me away a lot.”

The songs he did perform were well received enough that his manager thought he should release his own rendition. On Thursday, Shaggy will drop a cover of Harry Belafonte’s “Jump In the Line” after singing it last week on the show.

“My manager was like, ‘Yo, you got to drop that record because you did so good.’ So we’re dropping that. We also have an album coming out, it’s actually Frank Sinatra’s song book,” he said. “So it’s a bit crazy, but you know, that’s how I try to step out of the box and create the element of surprise.”

Of the upcoming album, he added: “The good part is, finally you can smoke weed to Frank Sinatra.” 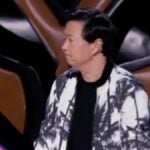 Next to be eliminated from the competition was Terry Ellis, Cindy Herron, and Rhona Bennett of En Vogue. The three ladies, under the guise of Queen Cobras, almost fooled the judges with their cover of Bruno Mars’ “Leave the Door Open.”

They even brought three more cobras on stage to try cast doubt about how many people were actually performing. But, ultimately, Scherzinger prevailed.

“I had a feeling in the beginning that Nicole was going to get it because she’s from a girl group. So I just, you know, and I knew that once they heard our harmonies that that would really help her like really figure out it was us,” Ellis told TheWrap.

There have been quite a few contestants this season who remarked on the size and weight of their costumes (including Shaggy who said his Space Bunny costume was “really cute” on paper, but not so much in practice). But not these ladies. They seemed to juggle those giant masks in stride and, while the Queen Cobras make a great addition to Team Bad, Herron said they almost weren’t reptiles at all.

“The Queen Cobras costume was the idea of production, and initially they showed us sketches and their idea was cats, like the Three Musketeers,” she said. “The sketches were beautiful and so we said, ‘Let’s do it.’ But then they came back later and had different sketches.” 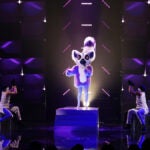 This week’s episode might have had viewers feeling a bit nostalgic. But, just like Shaggy, En Vogue also has some new endeavors on the horizon. They’ll soon be embarking on tour with New Kids on the Block and Salt-N-Pepa. While on the road, they told TheWrap they plan to take fans with them with behind-the-scenes stories on their podcast.

“I’m looking forward to the bus, actually. There’s something about driving across the country and being able to see the landscape that I’m actually excited to do,” Bennett said. “I’m also looking forward to visiting all these different cities. We have some fun wardrobe that we’re going to be unveiling as well. And then of course, the camaraderie that seems to already be building amongst the acts that are on the tour.”

And, yes, “Whatta Man” will be making it on the set list.

“The Masked Singer” heads into the Finals next week, where The Prince, Ringmaster, and Firefly will compete for the top spot. The show airs at 8 p.m. ET/PT on Fox.