(Warning: This post contains spoilers for the Season 11 finale of Fox’s “MasterChef.”)

The 11th season of Fox’s “MasterChef” came to an end Wednesday by revealing which of the three finalists — Autumn Moretti, Kelsey Murphy or Suu Khin — was named MasterChef. And the winner of the “Legends” edition was… Kelsey Murphy!

Here is the official description Fox provided for tonight’s two-hour season-finale episode, on which Kelsey claimed the big prize: Legendary Chef Curtis Stone returns as a guest judge for the semifinals when the Top Three battle for a spot in the finale in the appetizer round. Then, Michelin star chef Michael Cimarusti is the final legend to grace the “MasterChef” kitchen and it’s the finalists’ last chance to impress with their entree and dessert dishes.

On Season 11 of “MasterChef,” hosts and judges Gordon Ramsay, Aarón Sánchez and Joe Bastianich invited the most respected culinary legends — including Emeril Lagasse, Paula Deen, Roy Choi, Nancy Silverton and Morimoto — to raise the “steaks” of the competition for the most intense season in the show’s history, per Fox. For the first time ever, 15 of the best home cooks in America received the coveted white apron and a chance to impress four “legendary” judges with all new challenges, including a head-to-head battle with Ramsay himself. 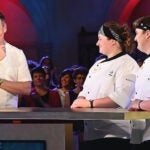 Also Read:
‘Hell’s Kitchen’ Season 20 Finale: And the Winner Is…

Though Autumn and Suu were among those who put up a good fight all season, only one home cook could win, and that turned out to be Kelsey. She claimed the title of MasterChef along with the $250,000 grand prize, a complete Viking kitchen and kitchen tools and bakeware products from OXO.