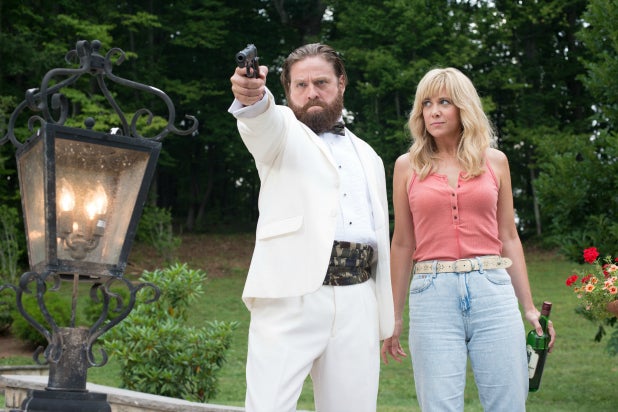 It is unwise to commit a crime for the sole intention of impressing your significant other. Unfortunately, no one explained that to David Ghantt before he used his position as vault supervisor with Charlotte, N.C.’s Loomis, Fargo & Co. to rob the company of $17 million in 1997.

A disposable pawn in a ridiculous scheme that included several other inexperienced players — an event that would become known locally as “the hillbilly heist” — Ghantt took a portion of the money and fled to Mexico, trusting the others to cut him in later. That didn’t happen. Instead, the naive fall guy befriended a hit man his colleagues sent to kill him. And according to the latest comedy from “Napoleon Dynamite” director Jared Hess, he did it all for love.

“Masterminds” tells a softer, sweeter version of the truth, of course. Here, Ghantt (Zach Galifianakis) is a simple, Strength Shoe-wearing man with a bell-shaped haircut, a job that bores him, a fiancée (Kate McKinnon) he dislikes, and a crush on co-worker Kelly Campbell (Kristen Wiig). Campbell’s friend Steve Chambers (Owen Wilson) plans the heist and uses Campbell to entice Ghantt into doing it as financial insurance for their future as a couple.

The eventual robbery is captured on a Loomis security camera, complete with a goofy victory dance by Ghantt (and yes, that really happened); an inept hitman (Jason Sudeikis) is hired to remove Ghantt from the equation; and the rest of the group blows its cover with extravagant, tacky spending sprees. Enter a determined FBI agent (Leslie Jones, given not very much to do). Crime solved.

Movie-Ghantt is shown as dumber and more absurd than he probably is (though Real-Ghant’s consultant position on the film suggests that he’s fine with that), and, curiously, much more inclined to rob an armored car service for the sake of a woman than as a response to working class poverty. When his fellow robbers ship him off to Mexico with $20,000 stuffed into his underwear, he says, “Twenty grand’s good; where I come from that’s a year’s salary.” With audience-friendly wackiness at stake, it’s the beginning and the end of the film’s commentary on downward mobility in the United States.

Instead, “Masterminds” seeks to romanticize its amateur criminals. The script by Chris Bowman and Hubbel Palmer (“Middle School: The Worst Years of My Life”), and Emily Spivey (“Saturday Night Live”) hews close to real-life incident, but it’s that near adherence to truth that forces the film to rely on grotesque characterizations and slapstick stunts for laughs.

Hess is just the filmmaker for this sort of thing. His frame (competently executed by cinematographer Erik Wilson, “Paddington”) is brightly colored and full of goofy details, all in the affectionate service of his cast. He’s enamored of walking human oddities he can warm up to something almost adorable, and the “SNL”-stocked ensemble is more than ready. Galifianakis, especially, is capable of Full Weirdo in his sleep at this point, as are Wiig and Sudeikis, and their performances are familiar, if not distinctly memorable.

That job falls to Kate McKinnon, a woman who steals scenes, just as she did in “Ghostbusters,” with a wild-eyed and immensely appealing unpredictability. When asked why she’s marrying Ghantt, she recounts the story of meeting him at her boyfriend’s funeral. “That one’s dead. This one’s alive. I’ll take the live one.”

“Masterminds” is kinder to its characters than most comedies about the bumbling and under-educated, and that’s Hess’s strength. His films are stocked with wildly idiosyncratic human beings who long for something just out of their reach, and he can’t bring himself to be cruel to them. If the results are more gently amusing than hilarious, he seems fine with that.

It’s a friendly movie that exchanges belly laughs for occasional chuckles, seemingly out of a sense of loyalty to tell his real-life characters’ story the way it nearly happened. But you can tell Hess truly wishes they’d gotten away with it, and if he’d invented them himself, they might have.