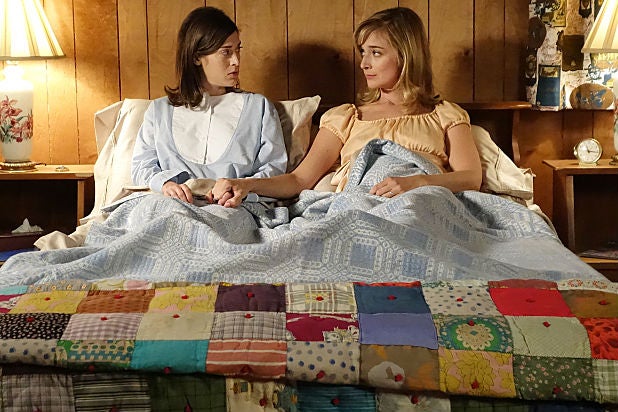 When we rejoin Bill Masters and Virginia Johnson, there’s been a time jump to 1965 and the couple is in Boston to present their sex-study findings. Both are nervous about the press conference the next day, where an emboldened Virginia (Lizzy Caplan) confidently says, “We are the sexual revolution.”

What’s most interesting about the show is that as season three opens, we now see how Masters and Johnson’s home lives have been affected by their work process and the fact that they’re now inextricably bound to each other professionally and sexually. Bill (Michael Sheen) is more distant than ever from wife Libby (Caitlin FitzGerald) – he won’t even sleep in the same bed with her when they go with Virginia and her kids to a weekend house. Bill would rather be left to proofreading the manuscript of his and Virginia’s book.

Virginia’s personal story is also compelling as she struggles to establish herself as a professional to be taken seriously alongside Bill Masters. She demands to be given time off to finish her degree so the press won’t ridicule her credentials when the book is released. Caplan’s expressive saucer eyes convey Virginia’s determination and fear in mere glances. Her performance in the drama continues to be one of her best to date and you feel her frustration when she laments that Bill has invaded every corner of her life.

The intricate relationship between the triangle of Bill, Libby and Virginia continues to deepen, with Libby now feeling particularly bonded to Virginia. While Libby keeps Bill’s home fires burning, it’s Virginia who has helped him achieve his professional potential and overcome his sexual difficulties. When we find out Virginia is pregnant at the end of this season opener, it’s a wrenching moment as we see the fear in Virginia’s eyes, instead of the joy women usually feel when they realize they’re with child. It’s also intriguing to think what will happen as this season progresses.

Look for Josh Charles to appear in an upcoming arc on the show as an executive in the scent industry who becomes involved with Masters and Johnson. Charles always brings his A game to any show and as fans have missed him since the demise of Will Gardner on “The Good Wife,” it will be wonderful to see him on the small screen again.

“Masters of Sex” never cheapens the subject of sex and all its attendant emotional ties. In season three, it’s clear the complex web of relationships will deepen and tangle even further. The show’s writers continue to craft the story with expert care, giving each character moments to shine. “Masters of Sex” continues to be a Sunday TV must.