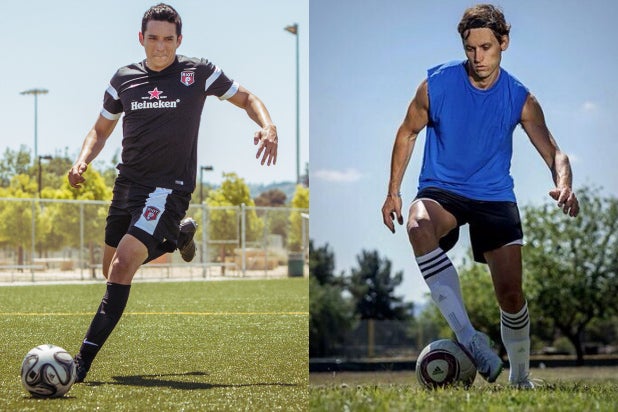 Gabriel Luna and Tanc Sade aren’t world class soccer players, they just play them on TV. But that doesn’t mean that the actors/futbol fans can’t properly predict what will play out on the pitch.

The stars of El Rey Network’s upcoming soccer/spy thriller “Matador” predicted the upcoming quarterfinals through the eventual finals of the 2014 FIFA World Cup exclusively for TheWrap.

Luna, who plays the titular Tony “Matador” Bravo and Tanc Sade, Alec Holester in the show, see the remainder of the international tournament playing out in completely different fashions: Luna likes a Colombia vs. Netherlands finals, while Sade sees it as Germany vs. Argentina.

Their show “Matador” premieres Tuesday, July 15 at 9 p.m. on El Rey Network. The World Cup quarterfinals kick off Friday on ESPN and Univision.

Picks and analysis — all in Luna and Sade’s words — are below.

Quarterfinals
Brazil vs. Colombia
Luna: Colombia wins 2-1. Oh, the benefits of youth. Sometimes it’s better to just not know any better.  The Colombians are playing as if they’re at the neighborhood pitch. They’re loose and noticeably having a blast out there. Cuadrado is dangerous from the flanks, and James Rodriguez is just on fire right now.  They remind me of the 1982 and 2002 Brazilian national teams. Gorgeous football. Their opponents, the current Brazilians, have not been at their best. Neymar has been his usual magnificent self, but the back line has been porous. Especially Julio Cesar in goal, who — with the exception of the Shootout with Chile — has looked particularly sluggish. Colombia’s youth, athleticism and oddly their naïveté, wins the day.

Sade: Brazil, despite their lackluster flair and thigh-slapping injury to Neymar, will overcome the exciting Colombians with their home court advantage. So the script says … But I’m an Australian and we always back the underdog, so it’s’ Colombia 2-1. Besides, Colombia’s striker — James Rodriguez — shares the same surname as El Rey himself, Robert Rodriguez. So Colombia must win.

France vs. Germany
Luna: Germany 2-0. This seems like a forgone conclusion for me. France has not seen any real competition up to this point and they’re about to run into the Machine that is Alemania. Benzema will not be enough. Müller and the Germans take it.

Sade: My first name is German, my last name is French, so I’m torn at the trachea as I yell in frustration. Alas, the Germans will dull France into submission with their tactical pragmatism. It’ll be a slow first half. The Frogs, out of sheer boredom, will have a cigarette and coffee at half time before ze Germans eco-steam roll them home in the second. 1-0 to Germany.

Argentina vs. Belgium
Luna: Argentina 1-0. This is a very evenly matched fixture, but all things being equal, having Leo Messi is the ultimate trump card.  He’s the best player in the world. As we have seen three times already in this tournament, you can play Argentina to a draw for the whole match, but in the last breaths of the game, Lionel Messi has the skill to strike from anywhere at anytime and finish his opponents. Argentina wins.

Sade: You can keep the Belgian fries, Messi will make a fine mess of the Belgians and all of America will make him a martyr for it (Even if Argentina wont).  3-0 to the boys in pajama stripes.

Netherlands vs. Costa Rica
Luna: Netherlands 2-0. Much like Colombia, Costa Rica’s youth has benefited them. Campbell has had a superb showing in this Cup. Although in the end, I think the pressure will catch up to this team and the pressure piled on by Robben, Van Persie and Sneijder will be too much. This game will end much like the NED vs. MEX game with the The Flying Dutchmen breaking down their opponent late in the match.

Sade: Need I remind you how close the Aussies came to beating the Netherlands? Two of the darlings of the world cup so far. Costa Rica has been playing some delightful football, but the men in Oranje will bring it home with Percie and Robben. 2-0 to Netherlands. And I’m sorry, but Tim Cahill’s goal was far more impressive than Percie’s flying header …

Sade: Germany will beat Colombia in the semis — dammit, why do the bad guys always win? Argentina will beat the Netherlands (simply because FIFA signed a contractual agreement stating one Latin American team must make the final).

Final
Luna: Colombia vs. Netherlands. In the World Cup Final anything is possible, so I will withhold my pick on this one. I. CAN’T. WAIT.

Sade: Germany vs. Argentina in the final. Who will win? Who knows? But call in to RedCardRiot.com and start a red card riot. You’ll feel better