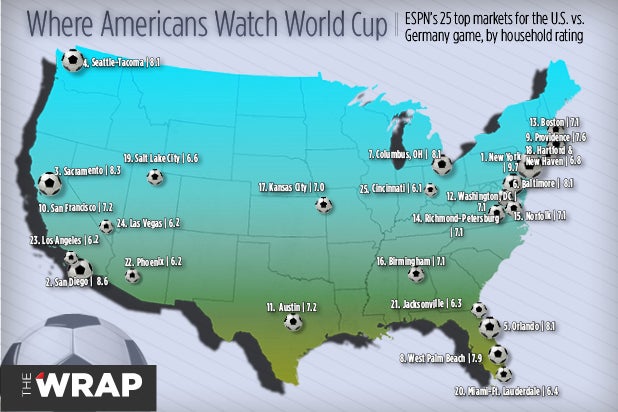 Millions of Americans have World Cup fever, but it remains for the most part a coastal epidemic.

As TheWrap reported last week, the largest markets for ESPN’s household World Cup ratings have been contained mostly to the most Eastern and Western states.

And as our new infographic shows, that trend held with Thursday’s matchup between the U.S. and Germany. (Click on the map below to enlarge it, and click here for the map of the top markets for the U.S-Portugal game.)

Could World Cup increase in popularity as the U.S. continues to do well? Of course. And there are exceptions to the coastal clustering of World Cup viewers — especially in Ohio, for reasons we explained last week. But for the most part, soccer is scoring best in markets that are within striking distance of an ocean.

One note: These are are based on Nielsen figures that measure the extent of a game’s viewership in particular ESPN household markets. Because each market is different, it’s difficult to say how many people are reflected in all.

Also, Univision viewers are not included because the network did not provide household numbers for as many markets as ESPN. But in our look at Univision numbers, we found that its biggest markets also tended to be closer to the coasts.

Why hasn’t soccer penetrated the heartland as much as it has the coastal states? It’s something to debate as the U.S. starts up against Belgium Tuesday. Share your theories in the comments.

Here are ESPN’s the top 56 household markers for the U.S.-Germany game.