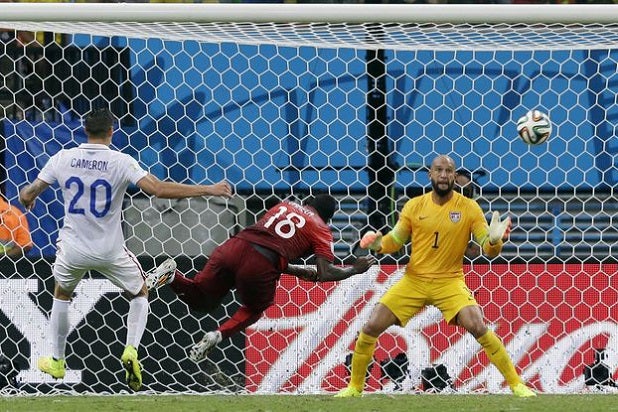 Remember when Team USA was still in the World Cup? Well, its second game — a tie versus Portugal that merely kept the country in contention for the knockout round — actually topped the deciding games of all other major American sports for the most recent season.

The only major sporting event that wasn’t beaten by the match, in fact, was the Super Bowl.

The deciding World Series Game 6, meanwhile, had 19.2 million viewers in live plus same day viewers, plus 277,000 on Fox Sports Deportes.

Game 5 of the NBA Finals, when the San Antonio Spurs clinched the series versus the Miami Heat, had to 18 million viewers on ABC.

Game 5 of the NHL Stanley Cup, when the Los Angeles Kings raised the trophy, pulled in 6 million viewers on NBC.

The country’s biggest TV event, the Super Bowl, had a record-setting 112.2 million viewers this year. Those gargantuan figures reflect not only the sport’s popularity, but are a testament to the strength that is the game‘s one-and-done format.

In the other football, Team USA was knocked out of the 2014 World Cup on Tuesday afternoon, falling 2-1 in extra time to Belgium.

That game initially set the top overnight ratings number for ESPN. But according to later numbers, it finished second in viewers to U.S.-Portugal — which benefitted greatly from airing on a Sunday.