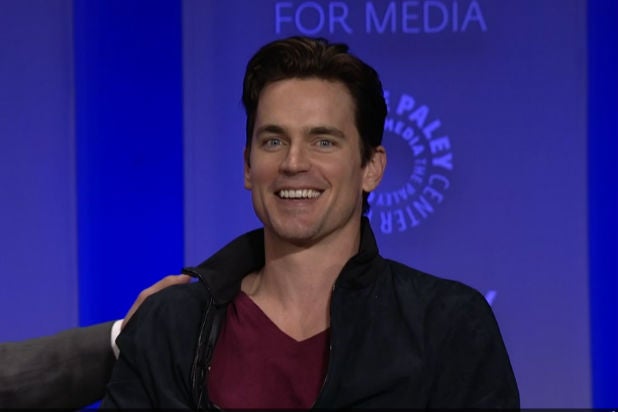 is checking into “American Horror Story: Hotel,” while longtime favorite of the Ryan Murphy franchise, Jessica Lange, is checking out.

Bomer, who recently won a Golden Globe for “The Normal Heart,” was revealed as the fifth season’s leading man during a panel in Los Angeles on Sunday for the FX anthology, part of PaleyFest 2015.

“I got to dip a toe into the insanity,” Bomer said, referencing his guest star role on “Freakshow,” which bowed in January. “I’m looking forward to going to the deep end.”

Bomer joins the previously announced , and dropped a small hint about the context of their on-screen relationship.

“I cannot confirm or deny that it may or may not be a romantic relationship,” Bomer said.  He said he’s yet to meet Gaga, real name Stefani Germanotta, but looks forward to it when production ramps up in the months ahead.

The panel included cast members , Dennis O’Hare and , and also announced the addition of Broadway vet and former “30 Rock” regular .

The new faces couldn’t distract fans from what many took as the biggest news of the evening: thatndeed won’t return to the franchise after four consecutive years.

“I’m done,” she said simply, as audience members at Hollywood’s Dolby Theater booed and cried out in despair.

“We’ve had a great run here. I have absolutely loved doing these four characters that I’ve had the opportunity to play,” Lange said. “In all the madness, I’ve loved the writers, my actors, Ryan and the whole, I mean, insanity of it, shooting here, shooting in New Orleans, the stories, everything.”

Lange’s run at “Horror Story” has been fruitful, landing her two Emmys and a Golden Globe for her work on the series.