(Spoiler alert: Please do not read on if you’ve not watched Monday’s episode of “Jimmy Kimmel Live!”)

Matt Damon has upset a lot of people lately, first with his comments about diversity in Hollywood and more recently with his controversial statement about gay actors.

However, one person who has had a beef with “The Martian” actor way before the star’s latest missteps is Jimmy Kimmel, and the late-night host dubbed Monday’s show “Hate Night” as the pair attempted to resolve their long-running problems.

Kimmel and Damon’s on-air beef has dated back over a decade, with Kimmel announcing night after night that he’s “run out of time” to bring Damon out to be a guest on his show, as the actor waits patiently for his turn.

“Poor Mars, they have one person on the planet and it’s Matt Damon,” Kimmel said on “Jimmy Kimmel Live!” Monday when describing the “Bourne Identity” star’s new sci-fi drama directed by Ridley Scott. All the while, Damon crept up behind him with a sign proclaiming he was coming on the show. 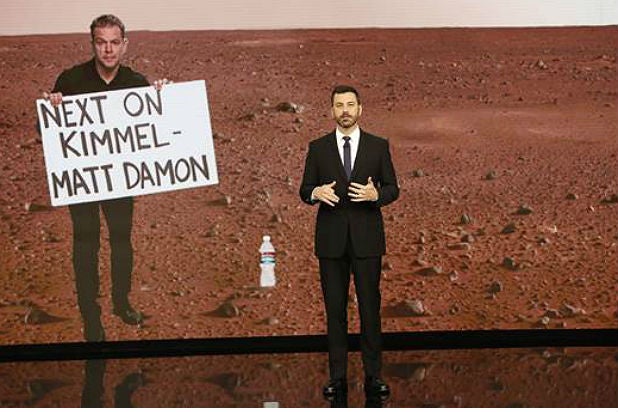 Kimmel then announced his first guest was Dr. Phil, but instead Damon came out in full makeup, with a fake mustache and bald spot, complete with a convincing Dr. Phil impression.

“Seriously, what are you doing here?” asked Kimmel, who was not fooled for a second.

“You said I could be on the show earlier when we were in therapy,” said Damon. So to prove that he was right, Kimmel showed the whole therapy session that he had on tape.

In the pre-taped segment, Kimmel told the therapist that he feels “anxious” but “hopeful” that they could work out their problems.

“He promised me over a decade ago that I was going to be able to be a guest on the show. He’s been nice enough to give me a room where I come and wait every night,” Damon humbly explained when he came into the session.

Kimmel said that he has tried to get him on, but “we have other guests, which he doesn’t care about. He thinks he is the only celebrity in California.”

Getting upset, Damon claimed that Kimmel “talks the talk and now he makes me think I am crazy.”

“I imagine it sucks to be him — look at him, and he’s trying to be a movie star,” Kimmel shot back.

The pair went on to argue over Damon buying a zoo for them both, which he said Kimmel never even saw, and about that time the actor “took over the show and busted the ratings!”

Also Read: Matt Damon Defends Gay Actor Remarks: 'It Is Painful When Things Get Said That You Don't Believe' (Video)

“I was terrified, it felt like duck tape suffocating me,” Kimmel said referring to when Damon hijacked the show in 2013 and left the host bound and gagged while he interviewed Nicole Kidman, Demi Moore, Reese Witherspoon and Robin Williams.

“Everything he just said apart from the duct tape happens to me every night,” Damon said. “I wanted him to know what it was like to try to get on the show but he can’t get … the show is right there and you can’t get to it.”

When asked to say something nice about each other, all Kimmel could say was he liked Damon’s friends, including Ben Affleck.

At the end of the session, Kimmel pledged to try and get Matt some airtime — just not tonight — and Damon committed to another 12 years waiting in the green room, especially if he was given a TV to watch.

The pair hugged it out with an overly long and creepy bear hug to close out the counseling session before dragging each other out into the hallway.

From Bill Murray to President Obama, we look back at some unforgettable visitors on the host’s ”Late Night“ and ”Late Show“