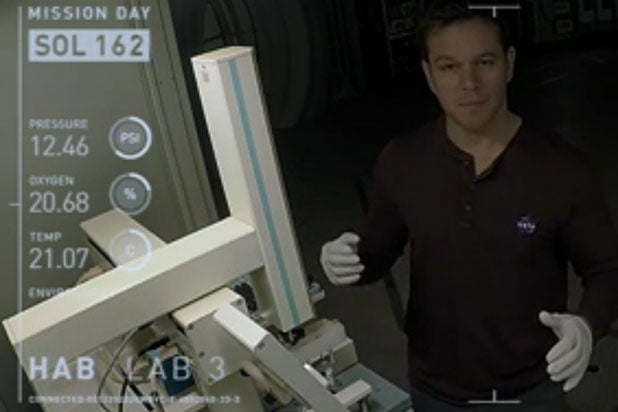 A deleted scene from “The Martian” encompasses everything that made audiences love the film to begin with: It’s funny while evoking sympathy for the astronaut left alone on Mars.

In the clip, Mark Watney (Matt Damon) continues to “science the shit out of this thing,” while taking care of research that wasn’t completed before Commander Lewis (Jessica Chastain) and her team were forced to leave abruptly.

While doing so, the log camera records everything he says and does, and Watney does not miss the opportunity to mock his fellow astronauts.

Also Read: Will Hugh Jackman's 'Pan' Be Any Match for Matt Damon's 'The Martian'?

“Martinez — I’m still not sure what it is that you do,” Watney says to the camera about Michael Peña’s character. “Honest to God, I really couldn’t tell you, I don’t know why we brought you. That’s it.”

“The Martian,” directed by Ridley Scott and starring Damon, Chastain, Kate Mara, Jeff Daniels and Kristen Wiig, made $55 million its opening weekend and has a Rotten Tomato score of 93 percent.

It is expected to gross another $30 million to $32 million its second weekend.