In a Newsmax appearance on Tuesday, Florida Republican congressman Matt Gaetz had a very curious thing to say about safety in the Capitol: He wishes his right wing colleague in Congress, Colorado representative Lauren Boebert, was allowed to pack heat at work.

Here’s what he said while appearing on “Greg Kelly Reports” earlier today:

“I’d feel a lot better if people like Lauren Boebert were able to carry a firearm inside the Capitol. Maybe that would keep us all more secure even than the Capitol police.” 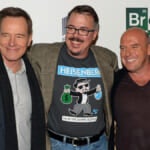 Also Read:
‘Breaking Bad’ Was Never Supposed to Be Set in New Mexico – But One Thing Changed That

Gaetz was on Newsmax to talk about — well I mean something to do with the Jan. 6 hearings, but since everything he has to say about them is riddled with inaccuracies and untrue statements, we don’t need to get into it. Just know that he would feel safer if the woman who once said she is “tired of this separation of church and state junk,” which of course is a key component of the constitution of the United States, carried a gun to work.

Incidentally, Boebert’s been in the news a lot recently. Most notably, because husband threatened some of their neighbors before he drove his car into their mailbox during a dispute on Aug. 4, according to a 911 call recording obtained by The Denver Post.