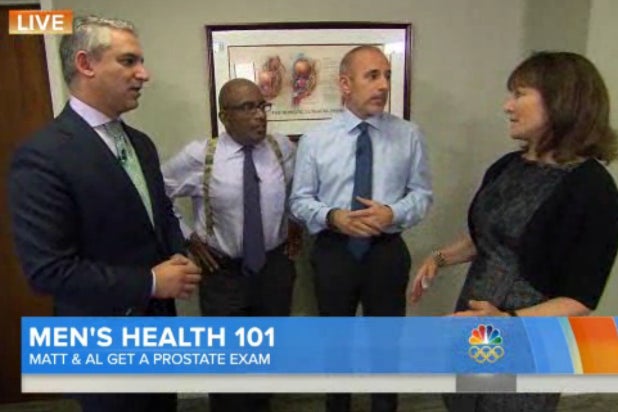 As each was examined individually by Dr. David Samadi, the camera stayed out in the hallway as a “Seconds That Could Save Your Life” timer counted up to demonstrate how brief the life-saving screening can be. Lauer, who went first, took all of 34 seconds.

Dr. Samadi, who made a number of weird jokes during the segment, has actually been monitoring Lauer closely for five years due to a family history. Lauer’s exam went very well, and his Prostate-Specific Antigen (PSA) levels have stayed mostly flat: a 0.9 versus his original 0.7. PSA is a protein produced by cells of the prostate gland, which is measured against a man’s blood in the test.

See video: Stephen Colbert on ‘Today’ Costumes: ‘Where in the World Is Matt Lauer’s Dignity?’

Next up was Roker, whose prostate was a little enlarged, but “not terrible,” Dr. Samadi said. He didn’t feel any nodules or abnormality, but maintained that Roker should be monitored for changes every six months to a year. He’ll be looking for any firmness developing in the future and keeping an eye on the PSA levels.

Neither “Today” show host reported that the exam hurt; at worst, it’s uncomfortable for half a minute. But the real barrier for some men is a pride issue, Lauer said, “I think a lot of guys are also concerned about the embarrassment factor of it, so my advice would be find a doctor you’re very comfortable with.” He added, “That embarrassment factor is not going to be an issue.”

About one in six American men will be diagnosed with prostate cancer in his lifetime. Not counting skin cancer, prostate cancer is the most common cancer in men and the second most-common cause of cancer-related deaths, according to the US. Centers for Disease Control and Prevention.

This is not hte first time “Today” has used its platform to promote cancer prevention. In 2000, former anchor Katie Couric had a colonsopy
on air following the death of her husband in 1998. The resulting uptick in colonoscopies nationwide was dubbed “the Couric effect.”