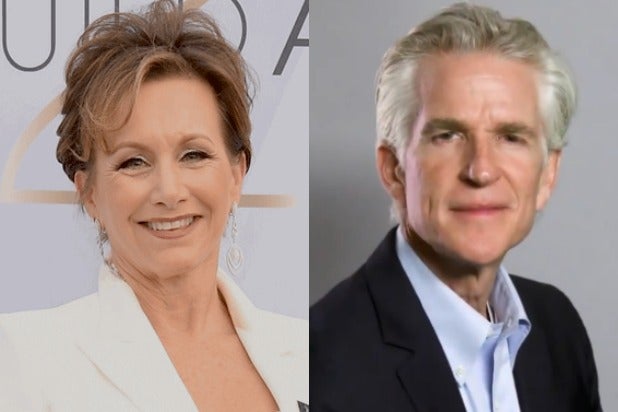 Nearly two weeks after Gabrielle Carteris beat Matthew Modine to be re-elected as president of SAG-AFTRA, the behind-the-scenes drama at the actors union continues.

On Sunday, Modine’s campaign spokesman Adam Nelson apologized for retweeting an apparent death threat against Carteris, both on his Twitter account and that of Modine’s Membership First party.

“We sincerely apologize for a retweet which was performed in error and is expressly not a shared opinion. The retweet has since been undone,” Nelson wrote. “#MembershipFirst affirmatively advocates only nonviolent protest of any election violations by Ms. Carteris.”

The original tweet, from actress and Modine supporter Daria Rumi, included the message “Let’s get rid of her once and for all! #Gabrielle Carteris” accompanied by a GIF from “Scarface” of Al Pacino wielding a high-powered rifle blowing away a squad of men behind a door.

“We are aware of the threat in question and we take this kind of conduct seriously,” SAG-AFTRA national executive director David White said in a statement. “We have zero tolerance for this type of behavior. This kind of activity can trigger tremendous fear and apprehension in our unique environment as many of our members have direct experience with being stalked and threatened during their careers. In an era of heightened scrutiny over threats in the workplace and public settings, we take each and every threat seriously and will respond aggressively to protect our members and employees.”

The leadership of Carteris’ Unite for Strength party and the affiliated USAN issued a statement of their own: “To say that we are shocked and appalled is an understatement. They have broken trust and forsaken the personal safety of a SAG-AFTRA member volunteer to score political points. Regardless of any attempted damage control after the fact, it is simply inexcusable that a campaign would ever consider promoting this incitement of violence. Especially at a time in our country when the threat of gun violence is all too real.”

The statement concluded: “We will not back down in the face of hate. This is further proof of how important our union is to protecting the health, well-being, and safety of all members.”

In an email to TheWrap, Rumi said that she planned to “clarify everything with the Union” but declined to comment further.

Reps for Modine and Membership First did not immediately respond to requests for comment.

Late last month, the “Beverly Hills 90210” star won re-election as SAG-AFTRA president following a bitter campaign in which she and Modine — and their respective parties — traded accusations of impropriety.

Carteris’ Unite for Strength has been in control of the Screen Actors Guild since 2009, with Carteris becoming president in 2016 after the death of then-guild chief Ken Howard. The party oversaw the guild’s merger with AFTRA in 2012, but the group’s pragmatic, closed-doors approach to negotiations with studios and networks has been criticized by the Membership First party, on which Modine campaigned with a slate that included actors Ed Asner, Neve Campbell, Elliott Gould and Rob Schneider.

Rosemary Rossi contributed to this report.