Meaty roles for older actors may be few and far between, but some things are worse than unemployment: namely, movies that trot out screen legends to provide an iconic cover for poor filmmaking. Such is the case with just-turned-90 Jerry Lewis‘ starring role in writer-director Daniel Noah’s “Max Rose,” a dispiritingly maudlin and clunky elder drama filmed more than three years ago, about an 87-year-old jazz pianist (Lewis) dealing with upsetting news about his recently deceased wife Eva (Claire Bloom).

The truest test for unrepentant treacle like this is to imagine how invested one would be if Lewis weren’t headlining his first movie in 20 years (since 1995’s “Funny Bones”), or if a great actress like Bloom weren’t seasoning a few flashbacks and daydreams, or if a comedy god like Mort Sahl wasn’t part of a cadre of veterans featured in a sequence at a retirement home. The answer is: barely invested at all, considering how simplified and pandering is Noah’s approach to issues of grief, aging and family dynamics.

When we meet Lewis’ newly widowed Max, accompanied by a pounding Michel Legrand piano score constantly vying for our attention, he’s in an epic sulk over learning that the woman he’d been happily married to for 65 years might have been unfaithful to him. (Coincidence alert: the makeup compact of Eva’s he discovers, bearing an unknown man’s lovelorn inscription, is dated the very weekend Max had been in New York recording his one mega-hit, dedicated to his wife.) 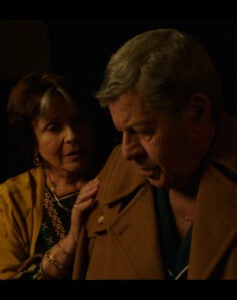 The thought of his beloved having harbored a secret infidelity consumes him. Though he’s dutifully looked after by an adoring granddaughter (a beatific, impossibly good-natured Kelly Bishe), Max is distraught enough that he gives a eulogy at Eva’s funeral only about his own hurt feelings. He also won’t stop being hard on the divorced son (a nicely understated Kevin Pollak) who’s trying to repair their fraught relationship, and begins carrying on an imaginary dialogue with Eva in which she teases Max about her mysterious paramour while he tears up his house.

All of this mostly serves to make Max a pill instead of a tormented soul, and no number of tight close-ups on Lewis — and there are a lot of them — can fuse his discrete facial expressions into a whole performance. Every scene feels like a soft, clichéd graze over a greeting card emotion rather than an organically felt component to a larger meaningful story. It’s a reminder of how last year’s exquisite “45 Years” more effectively addressed how a lifetime’s worth of companionship can be threatened and redefined by an unexpected crisis.

Sent to an assisted living facility after an accident, Max makes friends with a handful of retirees (played by Sahl, Lee Weaver and Rance Howard), whose conversational liveliness briefly give the movie some spark. The most easily absorbed scene has the gang spending an evening listening to old jazz records, kibitzing and pretending to play instruments, with Lewis showcasing a bit of his pantomime virtuosity. It’s all smile-worthy, but also in the manner of a sappy commercial for the promised camaraderie awaiting your loved one in a senior-care center.

Also Read: Jerry Lewis Says Female Comedians Can Be Funny, Just Not When They're Crude

Noah needs to bring his Max-Eva mystery to a close, though, which leads to a scene in the Bel Air palace of a movie producer (Dean Stockwell), and a tritely emotional journey afterward, which all somehow manages to feel simultaneously overwrought and undercooked. The whole shebang closes with an end-credits performance of Max’s hit song, “Hurry Home” (written by Alan and Marilyn Bergman): The tune’s fine as a nostalgic nod to a more acceptably schmaltzy era of film, but this soapy slog can’t “hurry” to its conclusion fast enough.