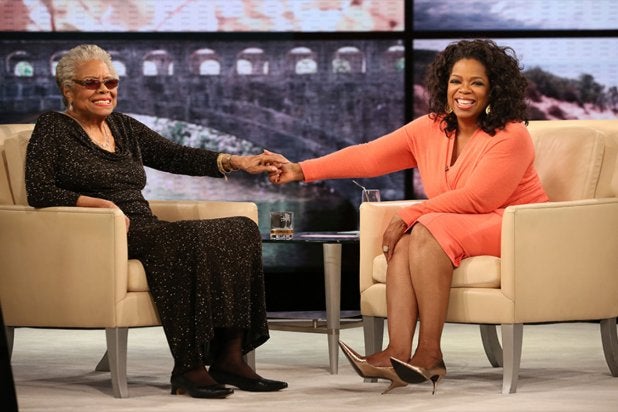 Oprah Winfrey had a deep connection to Dr. Maya Angelou, who passed away Wednesday, and the television titan will pay tribute to the author and poet with a television special. “I’ve been blessed to have Maya Angelou as my mentor, mother/sister, and friend since my 20’s,” Winfrey said in a statement after Angelou died. To honor that long friendship, Winfrey has scheduled a five-hour tribute to Angelou on OWN for Sunday, Jun. 1.

The night begins with a look back at Angelou’s appearance on “The Oprah Winfrey Show,” followed by her two-part interview on “Super Soul Sunday.” “Oprah Winfrey‘s Legends Ball” was a night celebrating 25 African-American women in art, entertainment, and civil rights. Angelou was among them, exemplifying all three areas. This marks the cable premiere of this event.

Afterward, OWN debuts a new episode of “Oprah’s Master Class” featuring “The View” co-host Whoopi Goldberg. Goldberg talks candidly about her childhood, her rise to stardom in the films, and her acceptance of success in all its forms.