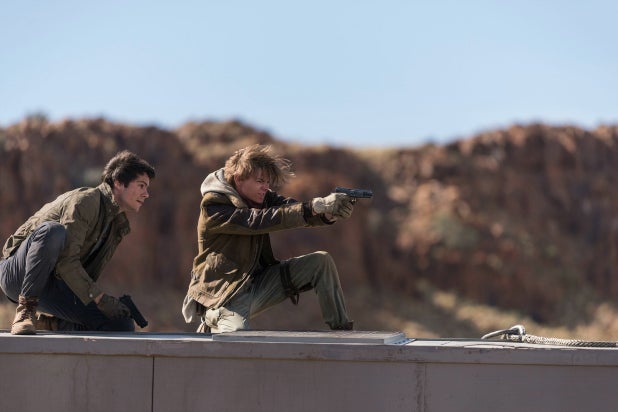 “Maze Runner: The Death Cure” leads a very successful post-Oscar nomination weekend for 20th Century Fox, hitting tracker expectations with a $23.5 million opening weekend from 3,787 screens to take the No. 1 spot and giving the final installment in the “Maze Runner” trilogy a $105 million global total.

The opening for “Death Cure” is down 23 percent from the $30.6 million made by “Maze Runner: The Scorch Trials” back in September 2015, but this was to be expected after this threequel’s release was delayed for a year following an on-set injury sustained by its lead star, Dylan O’Brien.

“Maze Runner” is one of five Fox titles that have placed in the top 12 on the box office charts this weekend, joining the studio’s Oscar contenders “The Greatest Showman,” “The Post,” “The Shape of Water,” and “Three Billboards Outside Ebbing, Missouri.” But while Fox distribution head Chris Aronson is pleased by the results, he notes that the biggest takeaway for the weekend is the variety that can be found on this week’s charts.

“Look at the top five. We have a YA title, we have an all-ages CGI extravaganza, we have a western and a musical and a period piece of something that happened forty years ago,” he said. “If the movie is good, you will find an audience for it.”

“Greatest Showman,” which finished in the top five for the sixth straight weekend, continues to build on its strong audience word of mouth despite lukewarm critical reception with $9.6 million for a $126.6 million domestic total. The film earned Benj Pasek and Justin Paul — winners of last year’s Best Original Song Oscar for “City of Stars” from “La La Land,” — another nomination this year for the song “This Is Me,” and “Greatest Showman” is $25 million away from matching the domestic total for “La La Land” as well.

“The Post,” meanwhile,” only earned two Oscar nominations for Best Picture and Best Actress, but is continuing to perform well with $9.1 million for a $58.8 million total. The film’s status as a Best Picture nominee combined with its political overtones should give it more legs through February as Oscar hype builds.

This week’s non-Fox entries in the top five, “Jumanji: Welcome To The Jungle” and “Hostiles,” also had some noteworthy achievements. “Jumanji” now has a running total of $337 million after a $15.8 million weekend. While no longer in the No. 1 slot, the film has now entered the top 5 highest grossing releases of 2017 after passing the $334 million made by “Spider-Man: Homecoming,” which was expected to be Sony’s biggest moneymaker on the 2017 slate. Instead, “Jumanji” and its crowd-pleasing cast led by Dwayne Johnson has now grossed more in North America than two of last year’s Marvel Studios’ releases, and with a worldwide total of $822 million, it has now entered the top 10 on last year’s global charts.

“Hostiles,” meanwhile, was expected to only open to about $4-5 million this weekend but is beating expectations with a $10 million wide opening from 2,815 screens. Though “Hostiles” didn’t earn any nominations for its cast led by Christian Bale and Rosamund Pike, it’s still a strong return for the fledgling film distribution wing of Byron Allen’s Entertainment Studios.

Fox Searchlight’s “The Shape of Water,” meanwhile, entered the top ten this weekend, making $5.7 million after earning 13 Oscar nominations. For more on the film’s big bump and the results for other Oscar contenders, check out our awards box office report here.