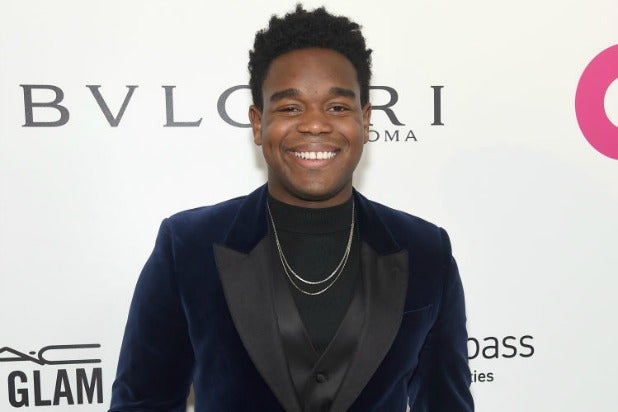 If you’ve watched the “Maze Runner” movies, you know who Dexter Darden is — he plays the ever-present Frypan, a character who, while not quite at the forefront, is always a major player in whatever is going on. And Darden told TheWrap that fans of the book series were not always happy with his involvement with the films.

“Originally, they weren’t very happy, because Frypan in the books wasn’t necessarily a man of color,” Darded explained, describing a phenomenon that has occurred fairly often when a black actor is cast as a character who is not black in the source material. See, for example, Idris Elba in the “Thor” films, which was met with a similarly irrational outcry from some fans at first. But as is usually the case with these sorts of “controversies,” the situation calmed down once the first movie came out.

“So they weren’t really the most excited about that, but Wes Ball and James Dashner had kinda come to the conclusion that, look, in the book it just says that he’s a chubby guy with nappy hair, so it’s like, if Dexter gains 15 pounds he could really be any ethnicity. Although it does say he has red hair. So it was a little bit mixed in the beginning, but since then the fans have literally been the most amazing. Like literally the most amazing, incredible support.”

Darden said the eventual positive response only grew when Frypan got into more of the action in “The Death Cure,” which lands on DVD, Blu-ray and 4K today.

“In the third one I think fans are really happy to see me kinda come to the forefront and step up to the plate and really showcase what my abilities are and what I can provide to the character and what I can provide to the team,” Darden said. “And so the outcry on social media, and fan mail as well, has just been incredible and this has been something I’ve been very fortunate to experience.”

Darden told me that earlier in his budding career, the types of roles he was able to audition for and would be offered seemed to, as the story in Hollywood so often goes, be dictated by racial stereotypes — but he seemed to think the situation is improving somewhat.

” ‘Rush Hour’ is my favorite movie of all time, so that’s kind of where I was aspiring to be — in a movie where a black guy can play opposite of an Asian man, and then it becomes one of the biggest franchises in the world. That’s what I love, and I feel like we’ve kinda gotten away from that a little bit, and it became a bit scary, And I was just getting roles and auditions for guys who are just a gangbanger on the corner, or the guy whose father or mother’s abandoned them and they don’t really have a life to look forward to,” Darden said. “But now I think with the cultural diversity and what movies like ‘Fast & Furious’ franchise are doing and ‘Get Out’ and the opportunities that they’re allowing are making that more popular again and giving us the opportunity to play roles outside of the basic stereotype that the black male is categorized in.”

We also discussed the significance of Darden, as a black man, simply existing in Hollywood and as a key part of this film franchise in Donald Trump’s America — a time in which profound political and cultural divides that many had thought, or at least pretended to think, were fading have reasserted themselves in force.

“It’s always been apparent. It’s always been something that’s overwhelming and one of those things that you just kind of have to come to grips with and operate through. I think with the way our country is going now, and that cultural divide being so prevalent, people are becoming a little bit more bold in their beliefs and their racism,” Darden said, before describing how this new “family” he’s developed with his “Maze Runner” castmates has certainly been a boon though all this.

“What I do know is I’m fortunate now to have a platform to keep developing and building myself as an individual to the point where I have a voice, in the sense of speaking out on certain matters — whether the president of the United States is being racist and sexist in this specific moment,” Darden said. “And I have the opportunity to stand up for like a sister like a Rosa Salazar or Kaya Scodelario, or have the bravado to speak up for my brother like a Ki Hong Lee, who is an Asian-American male, and not necessarily feeling like he has to be outcast because of his ethnic and historical or cultural background.

“While also standing alongside a brother like a Dylan O’Brien, who you know is a caucasian male, grew up in the States, who doesn’t believe in those kinds of things. We can stand by each other and have each other’s support. And that’s one of the things that’s so beautiful about “Maze Runner” and my castmates, who I love and who will be my family for the rest of my life, is that we always will have each other’s backs, regardless of the color of our skin or where we come from.”