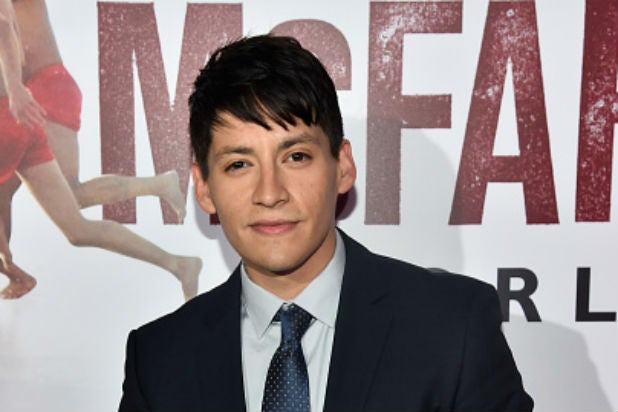 Carlos Pratts is on his mark, getting set for success and ready to have his big movie moment. As the breakout star of Disney’s inspirational sports movie “McFarland, USA,” Pratts plays Thomas Valles, the top runner on an upstart cross-country team coached by Kevin Costner, who plays an outsider in a poor Latino community.

Pratts had more experience than most of his co-stars, having played Demian Bichir‘s son on FX’s “The Bridge” and he starred in Paramount’s “Paranormal Activity: The Marked Ones.” The rising Latino actor spoke to TheWrap in advance of Friday’s release of “McFarland, USA” about working with Costner and director Niki Caro, opportunities for minorities in Hollywood and what he’d give to play Spider-Man in Sony’s upcoming reboot.

TheWrap: How did you land this star-making lead role opposite ?
Carlos Pratts: I was working on “The Bridge” and [spoiler alert!] I was about to die on the show, so my manager got me an audition to play David Diaz. I loved the script because I really enjoyed the story and its message. I visualized the audition and I couldn’t wait to play David, but I remember being [excited] to meet the actor who’d be playing Thomas. Then the casting director thought I’d be better as Thomas. There’s a physicality to that role and you have to be able to run like a runner. This is my first sports movie and the audition process was a bit longer [than most movies], because it took eight auditions.

How far did you actually have to run during filming? What was your mile time then, and has it changed since the shoot?
We probably ran two races in the time it took us to film one. We ran about a half-mile at a time. It wasn’t fun. When I was filming, I could’ve run a mile in under six minutes, maybe 5:30, but now I can do one comfortably in about seven minutes.

You have good chemistry with the other guys on the team. How’d you develop that bond offscreen?
The other guys were awesome. They didn’t need any help with their acting. I keep hearing how great our chemistry was. We stayed in Bakersfield and we were always together, so we’d eat and hang out. David and Danny Diaz were cast late so we’d record Rafael [Martinez] and Ramiro [Rodriguez] coming out of the bathroom and scare them. Sergio [Avelar] actually ran for McFarland, and he definitely helped us tremendously. He was on us about learning our lines because he’s from McFarland and they put so much into it. This was the community’s story. It really was a team effort. At the end of the day, we’re like seven brothers. We’ve stayed in touch.

You’re sort of the de facto leader of the McFarland squad, so did you feel like you had to live up to that during filming?
Yes, I felt like a leader on set. I was the oldest in the cast, so it just felt natural, I suppose. No one made me do it and I wasn’t trying to do it, it was just organic.

Kevin has obviously done his share of sports movies. Did he give you any advice? How was working with him?
My little brother, Luis, came on set right after Thanksgiving, around the first week in December. Kevin and him got to know each other well. Kevin hosts a Christmas party at his house in Santa Barbara and everyone who goes to his kid’s school and those in the community are welcome, and there’s food and toys and snow made from huge blocks of ice. So I brought my brother who is nine years old and he asked Kevin, “how much money do you have?” And Kevin said, “It’s not about how much money I have, it’s about sharing it with everyone else.” Kevin taught us so much and it was a great opportunity to learn from someone like him.

What about Niki Caro? She has experience working with young actors, having directed “Whale Rider,” so how did she help you and the rest of the team during the shoot?
Niki was so easy to work with. She’s from New Zealand and most New Zealanders I know are super relaxed. They don’t stress as much as people do here, they can let things go. Niki trusted us and gave us freedom during the five weeks of rehearsal we had as a team before shooting. We’d go over large chunks of dialogue as a team and if we weren’t getting it right, she’d help us make it better. You can see the heart she put into it because all of it is in the film.

Tell me about your upbringing. Where are you from? Are you a natural athlete or do you just play one in Disney movies?
I was born and raised in Houston, Texas. My mom was a single parent for a long time. She’s a teacher, so we bounced around a lot, and now I live in Spring Branch. I wrestled in high school and was decent at that. I loved football but I wasn’t that good… I’m a huge sports freak and I love Disney’s sports movies. “Remember the Titans” is a classic and I loved “Million Dollar Arm.” They can do wrong because they’re made with so much heart.

In the middle of the “McFarland, USA” premiere, Sony announced that it was rebooting its franchise again with Marvel’s help. If they decide to go the Miles Morales route, would you have any interest in play Spidey?
Every Saturday morning I watched “The Amazing Spider-Man.” I loved what Andrew [Garfield] and Tobey [Maguire] did, and I’m not saying I’d do it better than anyone, but I’d put in every ounce of my energy to live up to those guys. I’m a Spider-Man fan and at the end of the day, it’d be a dream come true to play a superhero, especially Spider-Man. I’d like to see more actors of color as superheroes [in general]. Miles Morales is a freakin’ amazing story. I’d love to play him. I got into acting because of “Friday Night Lights,” but back in the day, Billy Campbell in “The Rocketeer” put the superhero actor bug in me. I also wanted to be a Ninja Turtle and a Power Ranger. I love that kind of stuff.

How do you feel about the parts you’ve been offered as a young Latino actor?
I’ve been discouraged about some of the parts I’ve been offered but I do think it’s getting better. We’re starting to see a world with no color where the only thing that separates us is the color of our skin. We all came into this world the same way and we’re gonna leave the same way too.

What kind of support have you received from the Latino community with regards to “McFarland, USA?”
It has been a blessing. It’s been awesome to see the support from my community and this culture. But it’s not just them. Kids of all colors are seeing this and laughing and cheering and loving it. It’s inspiring. We do it to give them hope. It’s the coolest journey I’ve ever had. I couldn’t have asked for a better role to get me here. I’m already a superhero to my nine-year-old brother.