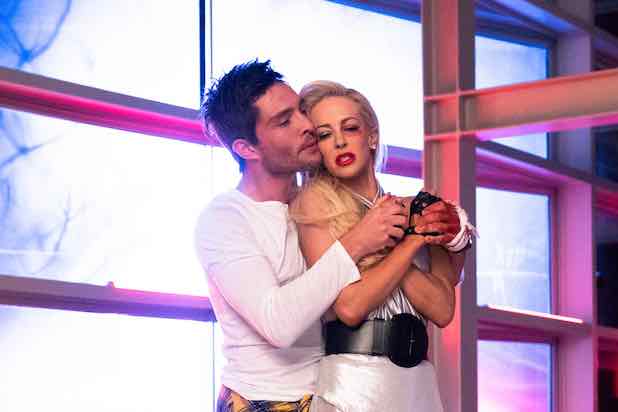 STXfilms has acquired the domestic rights to “Me You Madness,” the directorial debut of actress Louise Linton, who is also married to U.S. Treasury Secretary Steven Mnuchin, an individual with knowledge told TheWrap.

Linton also stars in the campy, comedy and thriller alongside “Gossip Girl” actor Ed Westwick, and the film will be made available through premium video on demand. STX is aiming for a mid-February 2021 debut.

Linton in “Me You Madness” plays a serial killer living a life of luxury in a dream house in Malibu who seduces a petty thief to be her next kill, only for the two of them to slowly fall for each other. Here’s the full synopsis:

“Me You Madness” tells the deliciously wicked tale about a beautiful, ruthlessly ambitious, intelligent, and successful businesswoman, Catherine Black (Louise Linton). She lives a life of luxury having an architectural dream house in Malibu, exclusive designer fashions, fast cars, and exquisite jewelry. She has no need for a man except to satisfy her natural serial killer instinct, literally. When Tyler (Ed Westwick), a petty thief, responds to her online roommate ad, he thinks he’s struck gold. He has no idea that after a night of partying and passion, he is really just on her menu to be her next victim until real romance gets in the way.

“Me You Madness” is a Stormchaser Films production. Linton also produced the film along with Kristen Ruhlin.

“Thanks to my killer crew and cast, the movie is every bit the playful 80’s homage I dreamed of when I wrote it,” Linton said in a statement. “It was a joyful set, even under pressure.”

“Louise is an amazing talent and can really do it all! She has created a crazy, funny, electrifying story that ticks all the boxes for our international partners. It’s glamorous, irreverent, romantic, and full of lip-smacking thrills. We could not have wished for more,” Highland Film Group CEO Arianne Fraser said in a statement.

“Louise and her team at Stormchaser Films have delivered a fantastic, fun movie that is ready to share with the world.  It’s pure entertainment that will thrill and delight you – something we all need during these tough times. Thank you, Louise, you have made our day,” Highland Film Group COO Delphine Perrier said in a statement.