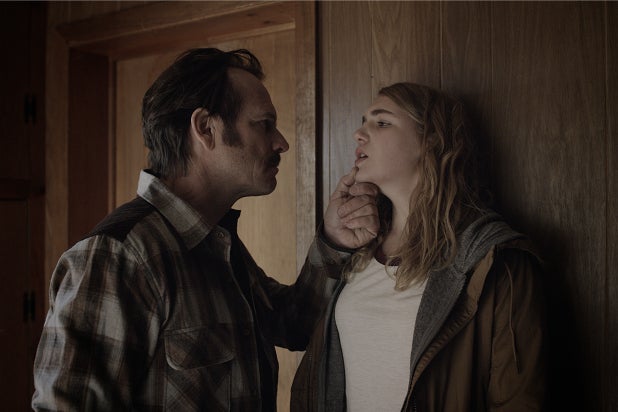 Paxton plays Wayne Caraway, a police officer and father of 15-year-old Casey (Sophie Nélisse, “The Book Thief”). At the beginning of the film, they’ve just moved to a rural part of Canada for reasons unrevealed. Casey immediately meets their neighbor’s teen son, Jonas (Josh Wiggins, “Max”), when her dog wanders off in the woods, and their shy smiles clearly foretell a country crush. Jonas no longer attends school because his father (Joe Cobden, “Arrival”) wants him to help work the farm. So Casey takes the lead, inviting her new friend to town when she goes out for some groceries.

“Oh no no no — Jonas, he don’t go to town,” his disheveled mother (Vickie Papavs) tells Casey, though he catches up to her when he sees her biking away. Jonas explains that his mother “gets sad sometimes,” a detail that factors into the plot not at all except to set up the reveal that Casey’s mother is dead. And when Casey’s daddy meets her new acquaintance, he too quickly dismisses the boy; in their debut script, writers Kevin Coughlin and Ryan Grassby have the parents impulsively disapprove of the friendship just cuz.

Regardless and all too soon, Morlando (“Citizen Gangster”) inserts the requisite falling-in-like montage, with Casey and Jonas romping in leaves and whatnot. But it turns out that a strong bond had to be established, because their relationship is not, ultimately, what “Mean Dreams” is about: There is no “good cop” in this story.

Wayne is bad news, abusive to Casey and of his authority. (To ensure we catch on to the latter, Jonas finds a parcel clearly marked “EVIDENCE” in Wayne’s garage.) The way in which he calls Casey “baby girl” and runs his finger over her lips is sickening, and when she doesn’t immediately heed a command, he drags her down the steps.

So it’s up to Jonas to save the day, and thanks to convenient timing, he’s able to grab Wayne’s cash (American dollars, for some reason) and persuade Casey — and her little dog, too — to hit the road.

The inevitable chase is textbook horror movie, with Wayne or his cop crony (Colm Feore) somehow appearing whenever the young lovers take a breather. But despite its contrivances and E-Z setup, “Mean Dreams” turns into a serviceable thriller as Casey and Jonas try both to run and to hide. The distance they allegedly cover isn’t terribly well thought-out, (in one scene, Casey is able to bury a key resource in a familiar spot, yet not much later they’re 50 miles away), but Son Lux’s percussive and atonal score combined with the kids constantly looking over their shoulders lend their escapes a sense of immediacy and danger.

Though the strong performances of Nélisse and Wiggins are key to convince you that they not only care for each other but are capable of thinking on their feet, it’s Paxton who must deliver sufficient menace to propel the story — and he’s terrifying. With a mustachioed scowl, mean-drunk growl, and brute physicality, his Wayne feels threatening from his first scene.

It’s certainly a departure for Paxton, and the actor reportedly admitted that he relished playing the villain. “Mean Dreams” makes you wish that he’d been given more opportunities to unleash his inner jerk.