In “Mechanic: Resurrection” Jason Statham plays a retired killer who spins records on a $10,000 turntable kept on his boat. Records. On a boat. He has his own batcave built into a shipping container, and identical getaway kits — cases packed with cash, passports, gun — stashed in different cities like videogame save points. His phone is a Nokia, and that detail alone reveals this guy sees the world through totally different eyes than you or I.

This is the sequel to Statham’s 2011 vehicle “The Mechanic,” in which his character Arthur Bishop killed people by staging untraceable “accidents.” It was a loose remake of a Charles Bronson film, but don’t worry: Even if you missed that movie, you won’t fail to understand anything in this one.

This sequel carries forward only two ideas: that gimmick-y “assassinations that look like accidents” are a valid substitute for story, and that Statham can carry an action movie even when it is propped up on such wobbly legs. Despite boasting a few ingenious action beats, this film challenges both concepts.

Here, a shadowy character from Bishop’s past lures the reluctant killer back into action to take out three targets, each of which is ensconced in an impenetrable location like an island prison or an ultra-secure high-rise. The plotting would be great as a video game, but in a 100-minute movie there’s barely time to construct each target as a diverting vignette, since time must also be allocated to setting up the reason Bishop plays along at all. 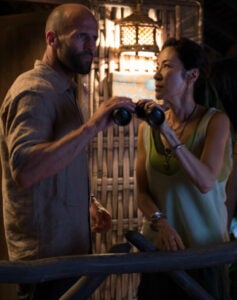 That reason is Gina (Jessica Alba), who is coerced into helping the villain. Coercion is the Big Bad’s thing, though he’s got so many goons around, it’s difficult to understand why he bothers with elaborate plots of blackmail and persuasion. Anyway, Alba’s character was a soldier at one point, not that you’d ever guess that if you slipped away for more popcorn during the one scene where she mentions it.

Director Dennis Gansel applies the same detached, ruthless efficiency employed by the assassin Bishop, in every aspect of his film. In action scenes that makes sense; while much of the fighting goes by too fast to truly appreciate the stunt work, Statham and the stunt team appears to be right in their element bashing each other around every ten minutes.

A few scenes are dressed up with memorably practical, if unusual combos. Say you’ve got a hot tub, a grenade, and a bad guy. What to do? Grenade goes in the hot tub, guy goes in the water, and boom: a variation on the “hot ham water” recipe from “Arrested Development.” Nothing is considered in any depth; the action is all of the moment rather than a string of tumbling consequences, so when Bishop slides down a building after dispatching a bad guy, it’s no surprise that news camera footage shows the baddie’s death, but doesn’t seem to see Statham at all.

Despite ostensibly globe-trotting from Rio to Bangkok to Sydney, few locations are memorable. There’s no flavor, no vibe, but frequent comped-in digital backgrounds. An opening Rio sequence is gauzy and too bright, often appearing to take place entirely on a soundstage rather than on an expensive restaurant terrace or near movie-pretty Guanbara Bay. (Bad timing on that front: thanks to the Rio Olympics, there’s no way to con an opening weekend audience into thinking the bay is clean, much less inviting.)

But cheap can be OK, especially in the context of a down-the-middle B picture like “Mechanic: Resurrection.” Statham works to put a bit of emotional muscle into the drama, but it’s like playing air guitar — he’s emoting notes that aren’t there.

Had even a flash of ingenuity been applied to character or scenario, this sequel might be a very different film. Alas, casting and directorial choices appear to have been made to suppress personality rather than enhance it. “Resurrection” is bland and generic, as if the colorful heroes were cut away from some of Marvel’s cheapest setpieces.

While Alba approaches co-lead status at times, “Resurrection” typically uses her character as a trope in so many ways it’s almost impressive. She’s a distraction, bait, an object, a nonsense love interest, and a damsel in distress. If checking off that list completed your “Action Movie Lady” bingo card, don’t call out just yet; the only prize is a copy of this movie.

Then there’s Tommy Lee Jones. With close-cropped hair and a soul patch, wearing round-lensed rose sunglasses and “aging rocker” fashion, Jones’s entire getup might be a low-key joke about Sting. With all of about five minutes of screen time, the actor’s per-minute rate must rival the year’s top earners. He’s worth it — those minutes are among the film’s most lively — but even flashy, grumpy Jones can’t act like a defibrillator powerful enough to crank this generic movie into competition for Statham’s better solo outings.

These shows won’t be disappearing anytime soon but your free time might be now summer is coming to an end, so make the most of the three-day weekend

"Stranger Things" (Season 1 on Netflix)
There's no reason to not have watched this '80s horror-adventure pastiche, unless you've been in the upside-down. (You'll get the reference when you watch.) It's only eight episodes, and "Stranger Things" has the best kid cast we've seen in years -- plus Winona Ryder.