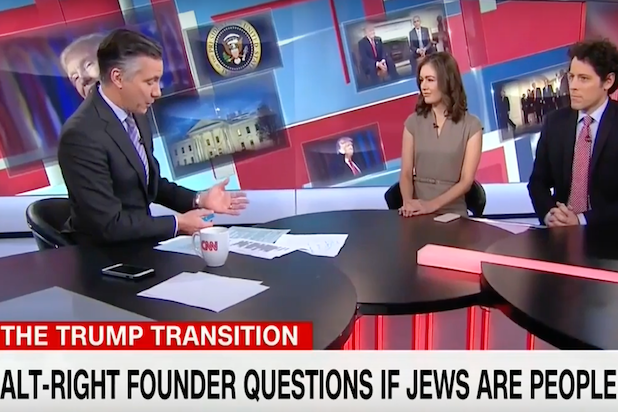 When is journalistic objectivity too objective? That’s the question many reporters and their readers are asking as they debate whether to call racists racists.

Many racists feel empowered by Donald Trump’s presidential win — activists count more than 700 cases of hateful harassment since election day — though Trump has told the instigators to “stop it.” Reporters have hesitated to call out racism for reasons ranging from objectivity to confidence that their audiences can draw their own conclusions.

Literal Nazi: "I am a literal Nazi."
Media: "This alt-right reactionary is stirring up nationalist fervor."

On Tuesday, CNN apologized for a chyron that appeared across the screen that read, “Alt-Right Founder Questions If Jews Are People” — a case of flatly presenting an anti-Semitic view without also noting that it was repulsive.

“It was poor judgement and we very much regret it and apologize,” a network representative told TheWrap.

The alt-right movement is one of many that some critics say includes people who are racist, anti-Semitic or sexist. And, of course, some of its members are just flat-out racist.

Over the weekend, people at a gathering of the alt-right National Policy Institute spouted Nazi propaganda in German and did the “Sieg Heil” salute, the New York Times reported. One speaker was caught on video proclaiming, “To be white is to be a striver, a crusader, an explorer, and a conqueror.”

The Los Angeles Times‘ story, meanwhile, focused on how normal the attendees seemed at first glance.

2015: Is the confederate flag a white supremacist symbol?

The story clearly noted the link between the conference attendees and more overt hate groups — but not bluntly enough for some critics. Those critics included Jon Lovett, a former speechwriter for President Obama turned Hollywood writer who tweeted that people should cancel their L.A. Times subscriptions and subscribe to other newspapers instead.

“The reporter @LisaMascaro, the editors of the story, and the publisher owe it to the readers of the @latimes to reflect and apologize,” Lovett wrote. “By the way, thanks to the New York Times, we know what actually happened at this conference.”

Lovett co-hosts the “Keepin’ It 1600” podcast, which routinely calls out the news media for facile and shortsighted coverage. The Los Angeles Times did not immediately respond to a request for comment from TheWrap.

Why are people quicker to append the term 'Nazi' on to feminist than they are for actual Nazis? Does it just need to be a neat portmanteau?

There are, of course, good reasons for reporters, and everyone else, to be careful about calling people racists or Nazis.

There’s the “crying wolf” factor, where a charge loses any power if it’s made too frivolously. Or when someone calls someone else out, and then turns out to be wrong.

Reporters also need to be careful that people on one political side don’t goad them into making generalizations about those on the other side. Some Trump critics have taken a guilt-by-association approach, suggesting that because the Ku Klux Klan and other hate groups have embraced Trump, and because Trump himself has said things that meet the “textbook definition” of racism, all of his followers — nearly half of American voters — must be racist.

And so reporters find themselves trying not to make the same sloppy, ignorant, despicable generalizations used by racists — without giving racists a pass.

My humble plan, so far, is to try to present it the way I did in this story. To call out racism as racism, but not to cry wolf. To give people the benefit of the doubt, when it is reasonable to do so. And to be meticulous in calling out textbook racism, whether by the the alt-right or the president-elect.

5 Major Trump Stories You Missed in the 'Hamilton' Distraction (Photos)

“Don’t let Trump bury his fraud case with this Hamilton noise. This is what he does every damn time”

By now you probably know every detail of Donald Trump's fight with the cast of Broadway's "Hamilton" -- but you may not have heard about all the serious stories it overshadowed this weekend. Here are five of them.