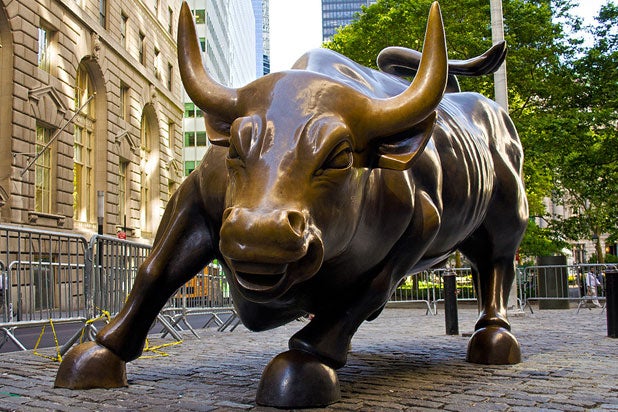 Wall Street traders were in a frenzy on Friday as the stock market was down 350 points in early afternoon trading.

The market traded about 1.5 percent lower on Friday after ending Thursday down triple digits at over 350 points. The stock tumble came as investors’ concern grew in response to China’s economic situation and its effects on the global economy.

Along with the rest of the market, media stocks tumbled for the second time in two weeks on Thursday and Apple dropped nearly 4 percent on Friday.

“While many media companies (especially movie studios) make lots of money in China, there’s no direct correlation, the Chinese market is not that critical to their business,” he told TheWrap. “We are seeing an overall adjustment in the market and a specific adjustment in terms of media stocks, which I think have largely been overvalued.”

Cowen and Co.’s Doug Creutz also lowered his estimates for CBS, Disney, Discovery, Fox, Scripps Networks, and Viacom on Thursday, dubbing the companies’ shares as “not dead, but in purgatory.” He noted that big media stocks had lost $70 billion in market valuation in the past two weeks.

CNBC’s Jim Cramer pointed to Disney as the main culprit of the stock market downfall: “You can say that Aug. 4 was the day the growth music died, at least for now,” he said on “Mad Money” Thursday. Commenting on the company’s conference call that hinted at lower profit projections, Cramer said Disney’s backward slide affected other media companies.

Apple, Facebook, Netflix and Google took hits on Thursday. Twitter, which has had a rocky few months on Wall Street, dropped over 6 percent, trading below its IPO price of $26 for the first time in its history. TWTR saw a low of $25.92 in the day to end at $26.

Also Read: From Facebook to Zynga, Wall Street Wants Out of Social Media

Wolk says the media business has reached a saturation point, so it’s only natural for stocks to fall backward: “There’s a saturation point in the market — we can’t watch much more TV, spend much more time on apps, etc. And so that pie is getting cut into smaller pieces as new competitors come on the scene and steal small pieces of the market. User’s time is finite and every gain has to come with a loss somewhere.”

The media stocks’ downward spiral came on the heels of Bernstein analyst Todd Juenger released a report hinting at rough times ahead for top TV companies. He cautioned companies to forget the old media business rules.

“Where the stocks/sector have traded historically is irrelevant,” he wrote. “The world has changed too much…all of these comparisons have declining subscriber fees and/or advertising displacement,” Juenger said. “Some have hopeful digital futures, but futures which look very different — and less sizable and profitable —  than the analog past.”

His report also downgraded Time Warner to Market perform while touting 21st Century Fox as the media stock with the best upward trajectory.