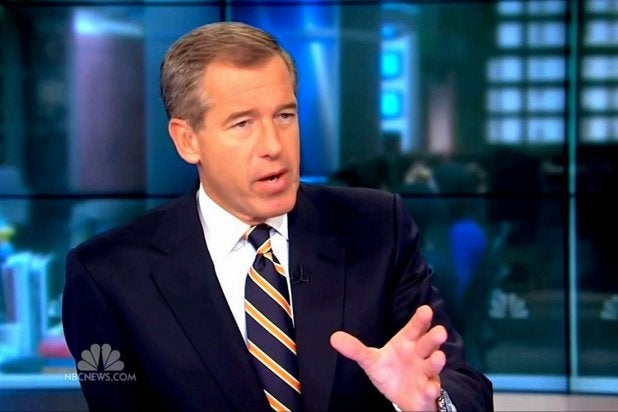 The media industry is reeling from the unprecedented six-month suspension without pay for NBC News anchor Brian Williams for exaggerating his Iraq War reporting.

“Frankly, six months is about as severe a suspension as you can possibly hand over,” CNN’s Brian Stelter said as the decision was announced.

Tweeting during his broadcast, Anderson Cooper posited on Williams’ future:

Very possible #BrianWilliams will not be back after suspension in 6 months. Do you think he will be? Should he come back?

Fox News broke into a pre-taped “O’Reilly Factor” with Shepard Smith reporting on Williams’ suspension. “And all of a sudden one thank you at one hockey game turned into a spiral that nobody could have predicted,” Smith said.

“This is nothing less than an attempt by NBCUniversal to stop the bleeding, to stop the hemorrhaging of its credibility caused by the fabrication that its star anchor, its top-rated network news anchor told about being hit by a helicopter…and it’s also an attempt to save Brian Williams‘ job,” Howard Kurtz told Smith.

Also Read: Why NBC’s Brian Williams Must Be Held to a Higher Standard (Guest Blog)

Rachel Maddow noted the awkwardness of covering a story swirling inside the building she works: “We really are working partners with them [NBC News]. But tonight, even as we are reporting on this breaking news about the news division we are apart of, no, NBC News will not make anyone available to discuss this story with us on the air.”

New York Times columnist David Carr joined Maddow: “I think it was a good outcome for them [NBC News]; I wanted to hear, both as a consumer and a reporter, from somebody besides Brian Williams about this,” he said. “He kind of got tripped up trying to make the trip back and forth [between news anchor and celebrity].”

The Washington Post’s Ruth Marcus says Williams needs to go: “To the extent that the job is more than merely reading words off a teleprompter, it is to be the institutional voice of trust and reason, reassuring in a crisis, the ultimate reliable narrator. When issues of trustworthiness become a distraction, the anchor loses his credibility, and therefore his perch.”

“One of the discouraging things about this episode is the way people who know better, including a number of Williams’ fellow anchors, have minimized what Williams had done while heaping praise on his character. It’s one thing to be loyal to friends and colleagues. But an anchor simply can’t play fast and loose with the truth, whether on the newscast or on Letterman. An anchor’s primary job, by far, is communicating honestly with the public.”

As always, The New York Post offers a colorful take:

And on CNN, TheWrap’s editor-in-chief Sharon Waxman noted the importance of what is found beyond Williams’ Iraq exaggeration:

“People do misremember, people aren’t perfect, if Brian Williams started to buy his own mythology a little bit, on a talk show, that’s one thing—the real question is what did he say that might not have been accurate on his news show when he’s working as a journalist; that’s the concern, there’s another shoe to drop in that scenario.”

Scarborough peeled back the curtain a bit, revealing in the beginning of the Williams’ firestorm, most inside the NBC building speculated he would get through the process relatively unscathed, but Burke “puts the reputation of the news division first.”

“Six months without pay [totaling $5 million] leads a lot of people in this building to wonder if Brian will ever come back,” Scarborough concluded.

On the “Today” show, Matt Lauer—who is one name pundits are tossing out as a possible Williams’ replacement—noted how this story hits home: “This is a very difficult story for us to report on because it is so, so, personal in so many ways. Most importantly, Brian is not only a colleague of ours here, but he’s a really good friend.”

Lester Holt will be the anchor of “Nightly News” during Williams’ six-month suspension.