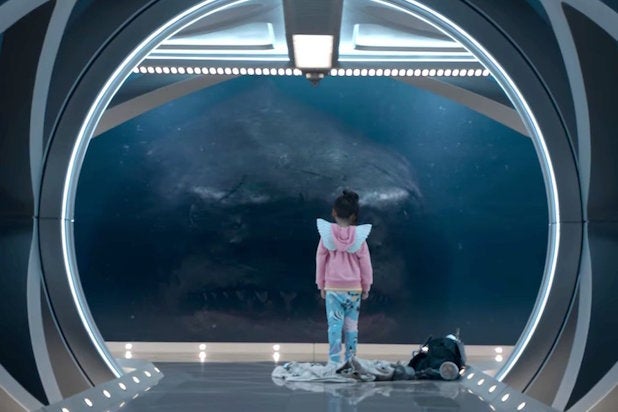 Warner Bros.’ “The Meg” has snuck up on an unsuspecting box office and devoured a $44 million opening weekend from 4,119, well above the $25 million projected by box office trackers this past week.

While some analysts thought the film might end up having a front-loaded weekend with numbers dropping on Saturday and Sunday, “The Meg” was able to match its $16 million opening day total on Saturday. It is the only film this weekend with a per screen average of over $10,000 aside from the single-screen opening of Magnolia Pictures’ “Skate Kitchen,” and it is now Warner Bros.’ biggest opening of 2018, passing the $41.8 million of “Ready Player One.” While critics were mixed with a 52 percent Rotten, “The Meg” received a B+ from CinemaScore audiences.

The film is also showing strong results overseas, giving it a chance to find profitability with a reported net production budget of $130 million. Overseas, the film grossed $97 million from 42 markets for a global start of $141.3 million. Just under 10 percent of that gross came from IMAX screenings, with $4.1 million coming from the U.S. and a total of $13.6 million

Analysts who spoke with TheWrap say that the film needs at least $400 million worldwide to break even, though Warner Bros. says the break-even point is lower. It notes that with this start, domestic grosses will share more of the weight, as “The Meg” is now considered likely to gross at least $100 million in its U.S. run. China Media Capital’s Gravity Pictures co-financed the film and is handling distribution in China, where the film opened to $50.3 million ($7 million from IMAX) in a very competitive late summer season in that market.

Regardless of whether “The Meg” stays out of the red, movie theaters have to be pleased at the results for this weekend throughout the charts, as signs point to an August that is far less sluggish than last year. All other films in the top five this weekend saw their estimates increase slightly after Saturday, starting with the third-weekend “Mission: Impossible – Fallout,” which earned $20 million to push its total to $162 million. Disney’s “Christopher Robin” is in third with $12.7 million, pushing its 10-day total to just above $50 million.

In fourth is Sony’s low-budget horror film “Slender Man,” which opened slightly above expectations with an $11 million start from 2,358 screens but could be facing a sharp drop next weekend if the film’s D- CinemaScore leads to poor word-of-mouth. Critics also panned the film with a 15 percent Rotten Tomatoes score.

Finally, Focus Features’ “BlacKkKlansman” was released on 1,512 screens this weekend and has opened to $10.8 million, the best result for a Focus release that opened on less than 2,000 screens. The politically-charged film from Spike Lee and producer Jordan Peele won the Grand Prix at Cannes back in May and has a Rotten Tomatoes/CinemaScore result of 97 percent and A-.