The mixture of nerves and champagne in Megan Fox’s system at the 2009 Golden Globe Awards wasn’t enough to make her vomit. It was enough to produce some serious word vomit, though.

The actress has revealed that drunken comments she made on the red carpet, which ranged from her self-proclaimed resemblance to actor Alan Alda to why her date was a no-show, led her to quit drinking altogether.

In an interview with Who What Wear, Fox shared the behind-the-scenes stories behind a number of ensembles from throughout her career, including one she’d rather not remember. When it came time to discuss the 2009 Golden Globes, it was not her shiny gold gown she took issue with but rather her behavior at the event. 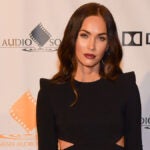 Also Read:
Megan Fox Says She Did Not Call Trump a ‘Legend’

“I was sat at a table with Blake Lively and all three Jonas Brothers,” Fox recalled to the outlet. “At the Golden Globes, they always put those giant bottles of Moët champagne on the table. I went through multiple glasses of that.”

“I don’t remember why, but I know I did. You can look that up,” Fox added.

We looked it up.

A clip from E’s coverage of the event obtained by TMZ confirms Fox’s fears about her red carpet candor. In the video, she shut down Giuliana Rancic’s compliments on her appearance by saying she believes she looks like “a doppelgänger for Alan Alda” before adding, “I’m a man.”

“I’m so painfully insecure. I’m on the verge of vomiting right now,” she said to Rancic. “I’m so horrified that I’m here.”

Rancic went on to bring up how Fox’s then-boyfriend Brian Austin Green wasn’t in attendance with her at the event, to which the actress said, “He doesn’t want to be my date. He’s a man, he has an ego. I think he’s probably working on music; I don’t think he cares.”

After expressing her jealousy of Salma Hayek’s “amazing” physique, Fox also shared how she prepares for occasions such as this one.

“I basically starve myself for a month,” she said, deadpan, before adding, “I’m kidding. I did a lot of Pilates. An immense amount of Pilates.”