Megan Fox knows people think of her as a sex symbol rather than the next Academy Award winner — but in her starring role in Diablo Cody’s "Jennifer’s Body," she knows her acting skills will be on full display when not shielded by massive "Transformers." 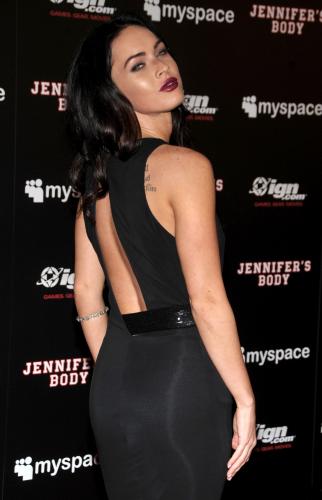 "There are no robots to distract you, so if it’s terrible, you’re gonna know it’s really f—ing terrible," Fox (pictured at MySpace/"Jennifer’s Body" party; photo by Getty Images) joked at a Q&A after a screening of 20 minutes from the film. "Of course, that was intimidating. But the character was so much fun for me that even when I wasn’t sure what I was doing, I was having fun with it … making fun of my own image, and who some people might perceive Megan Fox to be."

Fox revealed scenes from the horror flick Thursday evening at the Manchester Grand Hyatt, showing a creepy-but-funny segment which oozed Cody’s style. The screenwriter’s unique lingo from "Juno" was evident in the character’s dialogue: "Cheese and fries!" Amanda Seyfried’s character screams instead of "Jesus Christ," while Fox lets out an eye roll as she says "I’m totally Jell-O of you." (Jealous.)

"When I first set out to write this, I tried to make it serious, but the humor kept sneaking in," Cody said. "I have a macabre sense of humor. But comedy films and horror films are similar because they have a physical release."

In the footage shown, Jennifer (Fox) — stunning as ever and dressed in typical popular high school girl garb — scores her parents Sebring for the night and drags her friend Needy (Seyfried) out to a local bar. Once there, Jennifer’s instantly attracted to the skeevy, guyliner-clad band from Brooklyn playing on stage, fronted by "The O.C.’s" Adam Brody. But as Jennifer watches Brody’s performance dreamily, a fire starts in the bar, quickly engulfing the entire place in flames. She and Needy manage to escape outside, where despite Needy’s pleading, Jennifer is lured into a creepy fan with the lead singer.

Needy heads back to her house, only to be greeted moments later by a bloodied, pale Jennifer, who ravages Needy’s refridgerator, picking a roast chicken apart with her hands and then vomiting a black tar like substance all over Needy. The horror is over-the-top yet comical, and Fox, whose acting abilities weren’t exactly the focus of Michael Bay’s "Transformers" franchise, is surprisingly funny in the role, while the otherwise beautiful and composed Seyfried pulls off her geeky best friend with ease.

"It’s so unapologetic and I love how completely inappropriate it is at all time," Fox said of the film at the Q&A (see video below) . "It’s fun to be able to say the s— she got to say and have people find it charming."

Karyn Kusama, who directed the film, said she was happy to see women in the film’s leading roles because she believes they often play a central part in scary movies.

"A lot of horror is about femaleness — ‘Carrie’ or ‘Rosemary’s Baby,’" she said. "There’s a lot of fear of the female and celebration of that in a weird way."

Producer Jason Reitman, who worked with Cody as the director of "Juno," said he’d long been a fan of horror films.

"I go to see horror films more than any other type of movie in the theater," he said. "I saw ‘See No Evil’ and I still haven’t see ‘400 Blows.’ I come from a VHS generation who grew up on horror."

But Fox herself isn’t a fan of the genre.

"I don’t ever watch scary movies. I have a very intense fear of the dark," the actress said. "The last scary movie I saw was ‘Tooth Fairy’ back in 2005 and I was like 15 and I slept with my mother for two weeks afterwards. So for me to be able to play something I would normally be frightened by was really intriguing and interesting."