Megan Olivi, who covers the UFC for ESPN, was overlooked by network star Stephen A. Smith in a tweet about the channel’s UFC 260 coverage in March. A month later, she’s still pretty down about it.

“That was actually tough for me,” she said during a Q&A after UFC 261 on Friday. “I don’t love social media in general, but then to play such a big role in terms of pre- and post-fight interviews, like, I’m the one on-site doing them. Then to do all the hits on the broadcast and be a part of this team and literally the only women on the pay-per-view team.”

She continued: “There’s no other desk host, there’s no one on the pre- or post-show; It’s literally just me and I’ve worked to be here. I wasn’t handed this. It’s been a very long journey, as people who have seen me 10 years ago, I’m sure, can attest to. I’ve done everything the right way to get here, and to not get the acknowledgement as my male colleagues got, I genuinely was so hurt. It was nice to see the MMA community have my back on that.” 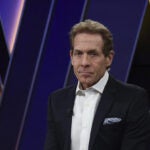 Smith doubled back on Sunday with a tweet that included mention of Olivi.

And btw……props once again to ESPN’s Until UFC team. @Jon_Anik,@dc_mma, @joerogan, @MeganOlivi, @arielhelwani, @bokamotoESPN. We simply have the best team, period. Major props to my man @danawhite for this event, too. Packed house. First sport to do it.#Thanks2AllOfYou

On March 28, Smith tweeted, “Forgive me for bragging, but we’ve got the best @ufc coverage in the world on ESPN+. Ya got @dc_mma, @joerogan & @Jon_Anik cage side. @ChaelSonnen & @bisping providing color. My bro @michaeleaves Hosting post-fight coverage and @bokamotoESPN & @arielhelwani always on scene.”

Olivi responded to the tweet at the time, writing, “Ummm hey there – you’re forgetting someone.”

In her comments Friday, she noted, “It’s unfortunately something the women in this room have dealt with before and will have to continue to deal with. I don’t think he did it on purpose.”