Megan Park, the director of the SXSW award winner “The Fallout,” has set her second feature film called “My Old Ass” that will be produced by Margot Robbie’s LuckyChap Entertainment and Indian Paintbrush.

Park is writing and directing “My Old Ass,” which is described as a modern coming-of-age comedy, though any other plot details are being kept under wraps. Casting will begin soon, and the film is expected to start filming this summer.

“The Fallout” was a teen drama about a high school girl navigating emotional fallout after a tragedy at her school, starring Jenna Ortega, Maddie Ziegler and Julie Bowen. The film won the Grand Jury Prize and the Audience Award for Narrative Feature at last year’s SXSW, and debuted on HBO Max this January. 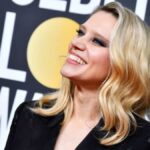 LuckyChap is currently in production on “Boston Strangler” for Searchlight starring Keira Knightley, and they’re in pre-production on Greta Gerwig’s “Barbie” for Mattel and Warner Bros. starring Robbie and Ryan Gosling.

Indian Paintbrush, which has been behind all of Wes Anderson’s films, as well as movies like “Me and Earl and the Dying Girl,” is at work on Anderson’s next feature “Asteroid City.”