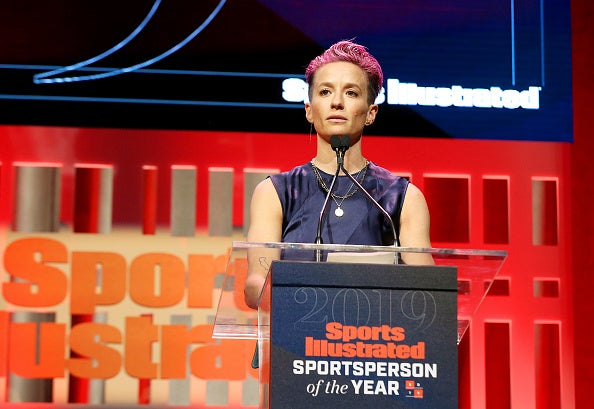 Megan Rapinoe accepted Sports Illustrated’s Sportsperson of the Year award on Monday night with remarks that turned the focus back on Sports Illustrated and what the soccer star sees as a lack of diversity within the publication and media as a whole.

That lack of diversity, according to Rapinoe, is seen not only among staffers at the storied sports outlet, but among recipients of the annual award.

“Is it true that I am the fourth woman deserving of this award?” she asked the audience in attendance at Monday’s ceremony at the Ziegfeld Ballroom in New York City. “I don’t think so.”

“We stand by Megan and chose her as our Sportsperson of the Year for this very reason,” said Stephen Cannella, co-editor in chief of Sports Illustrated, in a statement to TheWrap.

He added, “[S]he ended her gracious and heartfelt speech with, ‘Let’s just be better.’ That is exactly what we intend to do.”

The Sportsperson of the Year is an annual award given to an athlete, coach, or team who best represents the spirit and ideals of sportsmanship, character, and performance. The two-time World Cup Champion and co-captain of the U.S. Women’s National Team also graces the cover of the Dec. 16 issue of Sports Illustrated.

A video of Rapinoe’s speech was posted on Twitter by Sports Illustrated’s Jessica Smetana, who called it a “powerful moment.” It was also reposted by SI writer Grant Wohl, who said the athlete was “speaking truth.”

Rapinoe is known for being outspoken. She took a knee during the national anthem in 2016, following the lead of Colin Kaepernick and other NFL players protesting racial inequality. More recently, Rapinoe has been vocal about her distaste for President Trump. Before the U.S. team won the Women’s World Cup, she made it clear she was “not going to the f—ing White House” like other championship winners.