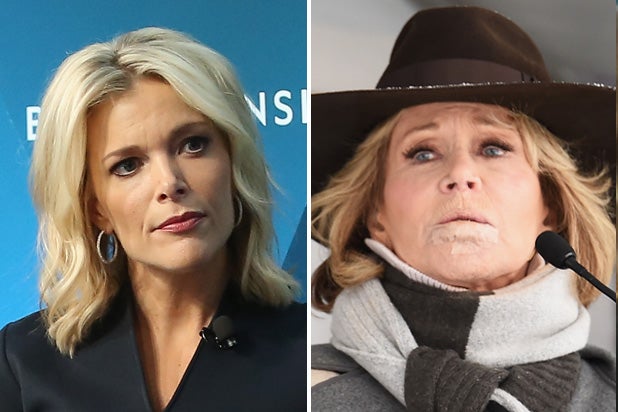 Megyn Kelly lit into Jane Fonda on Monday, highlighting the behavior that earned the actress the nickname “Hanoi Jane” while defending the time last fall when she questioned Fonda about plastic surgery.

Kelly was defending herself after Fonda said over the weekend that the question was “so inappropriate” and that Kelly is “not that good an interviewer.”

Kelly responded with a cannon — by bringing up the time Fonda posed on a North Vietnamese anti-aircraft gun. Here are her comments:

Many of our veterans still call her “Hanoi Jane” thanks to her radio broadcasts, which attempted to shame American troops. She posed on an anti-aircraft gun used to shoot down our American pilots. She called our POWs hypocrites and liars and referred to their torture as understandable. Even she had to apologize years later for that gun picture, but not for the rest of it.

So… setting aside the issue of whether plastic surgery has anything to do with Vietnam, is Kelly right about Fonda’s record? Let’s break down her remarks.

“Many of our veterans still call her “Hanoi Jane” thanks to her radio broadcasts”: True, but she doesn’t just have the nickname because of the radio broadcasts. Read on.

“Radio broadcasts, which attempted to shame American troops”: Fonda did record messages that the North Vietnamese played for Americans to weaken their resolve. Whether Fonda wanted to “shame” troops is subjective. Here’s her explanation, from 2011:

I had decided to do the broadcasts because I was so horrified by the bombing of civilian targets and I wanted to speak to U.S. pilots as I had done on so many occasions during my visits to U.S. military bases and at G.I. Coffee houses. I never asked pilots to desert. I wanted to tell them what I was seeing as an American on the ground there. The Nixon Justice Department poured over the transcripts of my broadcasts trying to find a way to put me on trial for treason but they could find none.

Here’s a transcript of her remarks so you can judge for yourself.

“She posed on an antiaircraft gun used to shoot down our American pilots.” True, by Fonda’s admission. It wasn’t firing at the time, and Fonda said in 2011 she “hardly even thought about where I was sitting” and that it “is possible that it was a set up, that the Vietnamese had it all planned.”

“These men were bombing and strafing and napalming the country,” she said. “If a prisoner tried to escape, it is quite understandable that he would probably be beaten and tortured.”

“Even she had to apologize years later for that gun picture…” True. Fonda said that while she may have been tricked into taking the picture, “The buck stops here. If I was used, I allowed it to happen. It was my mistake and I have paid and continue to pay a heavy price for it.”

“…but not for the rest of it.” False. Fonda has apologized for the “liars and hypocrites” statement, which she said she made out of anger that the Nixon Administration was lying about the extent of the POW torture for propaganda purposes. Here’s what she said in 2011:

In my anger at the torture story that was being allowed to spread, at how the entire situation was being manipulated, I made a mistake I deeply regret. I said that the POWs claiming torture were liars, hypocrites, and pawns. … As anyone who knew or worked with me in those years knows… my heart has always been with the soldiers. I should have been clearer that my anger back then was at the Nixon Administration.

Here’s Kelly’s take on what she called Fonda’s “poor me” routine.

“And now, a word on Jane Fonda …who appears to be fixated on an exchange I had with her *months ago* on this show” #MegynTODAY pic.twitter.com/jmUMlGFaJr