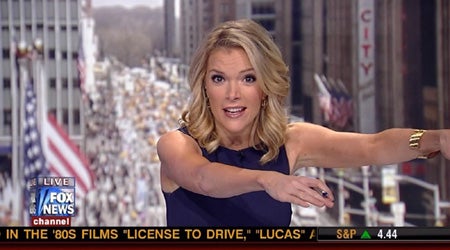 Megyn Kelly, the latest cable star to emerge from the Fox News factory, is having a moment – and she’s been hitting the media circuit of late.

On Tuesday she submitted to an interview on Howard Stern’s Sirius show.

Some highlights from the appearance:

>> Stern: "When you get hired by Fox, (did) they do a litmus test to see if you are a conservative?"

>> Kelly said that she almost didn’t get the Fox gig. “I think it’s a no,” Kelly said she was told by a subordinate to Roger Ailes. "Ten minutes later, he called back … ‘Roger definitely wants you.’"

>> Kelly: "You don’t get on the air at Fox without talking to Roger Ailes first."

>> Kelly on her relationship with Bill O’Reilly: "I never party with O’Reilly … When he’s off the air, in my judgment, he’s a little shy."

>> Stern: "Will you sue them if they try to get rid of you based on appearance?"

Kelly: "No. TV is a fickle business. And that’s not a sue-able thing. Nothing illegal about saying now you’re ugly, now you’re out."

Stern: "It’s different for guys … Glenn Beck looks like a train hit him."

Then, this being Howard Stern, things got personal:

>> Stern: "Would you ever get implants?"

>> Stern: "You had sex when you were pregnant?"

Kelly: "Yes, no issues there."

Stern: "Even in the third trimester?"