Will there be a Mel-come mat waiting for Mel Gibson at multiplexes this weekend? After an on-screen absence of seven years, the 54-year-old star returns to the front of the camera in “Edge of Darkness.”

This suspense thriller, set in Boston, lurches uneasily between Mel-odramatic, Mel-omaniacal and Mel-ancholy. And it only serves to underscore how much Gibson has always been the darkest of our action heroes.

In “Darkness,” he again portrays a character who suffers mightily (for our sins?) before finding ever-lasting redemption. The hackneyed, at times murky drama isn’t likely to catapult him back to the top of the leading man-heap, but it does offer a field day for those looking to indulge in a little amateur psychoanalysis of the star and the roles he has chosen to play during his three-decade career.

Here, he’s grieving Thomas Craven, a weathered police detective in Boston trying to find out who murdered his only child, a 24-year-old daughter (Bojana Novakovic) who worked at a nuclear research company. The deeper Craven digs, the farther he finds himself traveling a convoluted path involving corporate skulduggery and shadowy government operatives.

Adapted from a six-part, award-winning 1985 BBC miniseries and directed by Martin Campbell (“Casino Royale”), “Darkness” just gets loopier and loopier as it goes along. It doesn’t help that Danny Huston turns up as the oiliest of CEOs and skulks about, during a climactic shoot-out scene, clad in a silk bathrobe in a wood-paneled baronial mansion. As Amy Poehler used to say on “Saturday Night Live’s” Weekend Update segment, “Really?” 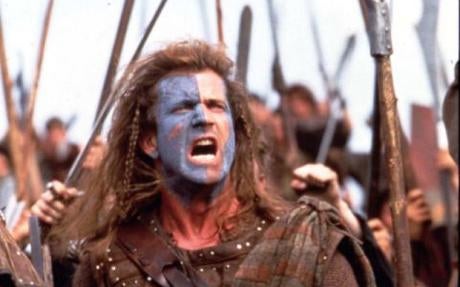 Armchair Freuds will enjoy putting Gibson on the couch for this one.

His oft-reported real-life belief in old-school Catholicism would seem to be seeping through. Craven wears a cross, is familiar with Latin, and the end of the movie makes literal a belief in life after death. What’s more, Craven suffers the death of someone near and dear to him, gets beat up badly and is decidedly unsurprised to discover that evil lurks everywhere.

If you run through Gibson’s catalogue of roles, these are familiar traits and themes. In his three-decade career, the actor has shown a marked penchant for playing anguished characters, many with a martyr complex.

Such suffering is in distinct contrast to the on-screen personaes of Arnold Schwarzenegger, Bruce Willis and Harrison Ford, Gibson’s fellow action heroes of the late ‘80s and 1990s, when all had flourishing careers. These guys may have gotten knocked around a bit, but mostly they uttered a jokey one-liner and then vanquished baddies with a solid punch or a blazing Howitzer.

They were Teflon tough guys. But you always knew that Gibson was hurting — and not just physically. Sure, he triumphed in the end, but sometimes at the cost of his own life. Ever recall Schwarzenegger, Willis or Ford ending up deep-sixed in an action hero role?

This torturous strain holds true for Gibson even in such glibly commercial fare as his “Lethal Weapon” series, in which his cop character loses a wife and recklessly puts himself into situations in which he is slapped around and shot repeatedly.

In “Braveheart,” the historic drama in which Gibson portrayed Scottish warrior William Wallace, his wife is murdered and Wallace himself is bloodily drawn and quartered. In “The Patriot,” he is a widower who then loses a teenage son in battle. And as Hamlet — arguably more of an inaction hero — we’re talking murdered father, drowned girlfriend, poisoned mother and Hamlet himself expiring at the tip of a poisoned sword.

On screen, Gibson has made a practice of suffering heroically and then suffering and suffering some more. (One assumes it was only because he had aged out that he didn’t play Jesus in his own “Christ”; it would have been the perfect Mel role.)

It’s an odd, almost schizophrenic persona upon which to build a career. His characters are really twofers: both the victim and the hero. This just may be the cinematic equivalent of, and please pardon me if I border on the sacrilegious, having your wafer and eating it, too.