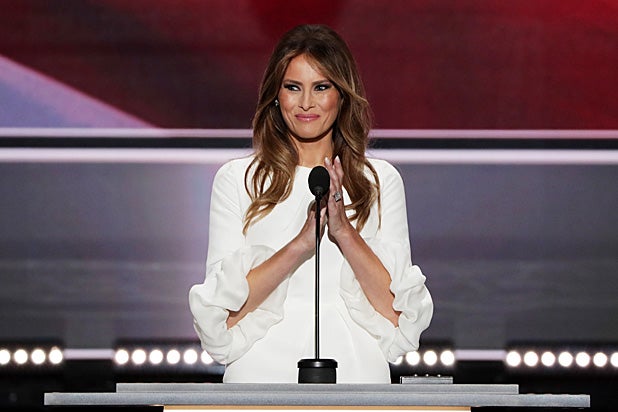 Nude photos of Melania Trump that were published this week in the New York Post contradict the GOP presidential nominee’s wife’s version of how she came to America, according to Politico.

The Post published two-decade-old photos of Melania that place her in the United States in 1995, but she has repeatedly stated she came to New York in 1996, Politico reported.

Citing immigration experts, Politico wrote, “There’s even a slim chance that any years-old misrepresentations to immigration authorities could pose legal problems for her today.”

Donald Trump famously wants to crack down on illegal immigrants, so it’s clearly an issue if his wife has been lying about how she wound up in the country. Melania has told versions of her story to Harper’s Bazaar and MSNBC that are inconsistent with how visas actually work, according to Politico.

Immigration legal expert Andrew Greenfield told Politico that it “could constitute visa fraud” if she entered the country on a temporary visa with the intention of working. And according to Politico, Melania’s version of how she obtained visas are more consistent with the temporary B-1 or B-2 versions, as opposed to the H-1B visa that would have allowed her to legally work.

Also Read: Clint Eastwood on Donald Trump's Racism: 'Just F--ing Get Over It'

Melania Trump has released a statement, promising she has “been in full compliance with the immigration laws of this country.”

“In recent days there has been a lot of inaccurate reporting and misinformation concerning my immigration status back in 1996,” Melania said. “Let me set the record straight:  I have at all times been in full compliance with the immigration laws of this country.  Period.  Any allegation to the contrary is simply untrue.  In July 2006, I proudly became a U.S. citizen.  Over the past 20 years, I have been fortunate to live, work and raise a family in this great nation and I share my husband’s love for our country.”