Impressed by how Melissa McCarthy‘s comedy grossed $23.5 million and gave “Batman v Superman” a run for its money at the weekend box office, where “The Boss” might have eked out a photo-finish win?

And here are a few things that we learned when we looked into how it happened.

1. She Can Open Movies

Ever since she broke out with her Oscar-nominated performance in “Bridesmaids,” McCarthy hasn’t merely enjoyed a string of hit films. She has a built a consistent, five-year track record of bankability. Each successive wide-release starring vehicle for the actress has debuted over $20 million — sometimes well over (see chart).

That’s an Adam Sandler-esque run that shows no signs of letting up — especially when even very poorly reviewed movies like “The Boss” and “Tammy” (both of which were directed by McCarthy’s husband, Ben Falcone) have made the money grade. 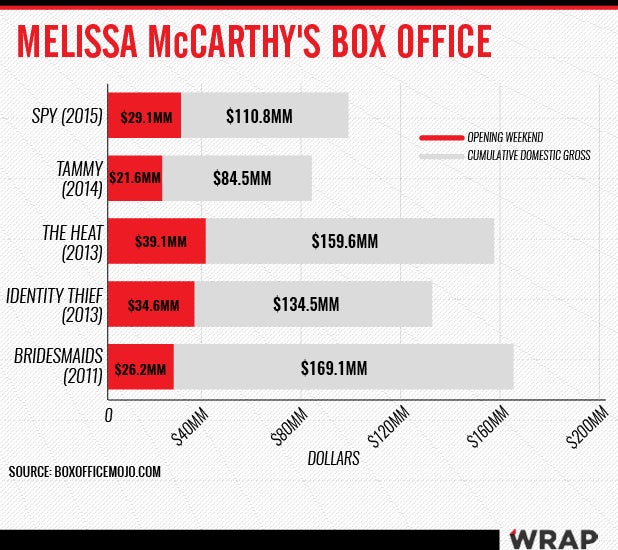 “Her fans are like — and I’m not going to name any particular political candidate — but it’s the type of passion for her that some have for some of the current candidates running for president,” comScore Senior Media Analyst Paul Dergarabedian told TheWrap.

That’s particularly true when McCarthy is in her raunchy, R-rated wheelhouse. “No matter what she does, the audience — her audience, her core constituency — loves her, and she can almost do no wrong,” he added. Which brings us to…

A McCarthy movie hits the multiplex with a bawdy, bruising, R-rated bang. It’s a sound that seems to drive critics crazy — “The Boss” stands at just 18 percent on Rotten Tomatoes — but the star has a built-in fan base that is as broad as it is devoted. The statistics bear this out: “The Boss” drew an almost even number of old and young viewers, while it appealed to a first-weekend crowd that was 67 percent female.

“The No. 1 reason that people went [to ‘The Boss’] was Melissa McCarthy at 79 percent,” Nicholas Carpou, Universal’s President of Domestic Distribution, told TheWrap, “followed by the humor at 66 percent. Which, I think, speaks volumes to how these characters that she creates and that she plays, how much they absolutely resonate with comedies. She is like the personification.”

Also Read: Melissa McCarthy's 'The Boss' Gets Fired by Critics: 'It Is the Worst Kind of Bad Movie'

There may have been a time when Universal planted “The Boss” on this weekend as a sort of counterprogramming move against Warner Bros.’ superhero blockbuster — but with no real hopes of a win.

Well, think again. With its steady, and steep, declines since its huge opening (also to withering reviews that might have hurt after a huge $166 million first weekend), Warner Bros.’ “Batman v Superman: Dawn of Justice” has left the door open for McCarthy to sneak in and eke out a victory when final numbers are released on Monday.

4. It Pays to Counterprogram With Comedy

If you thought “Batman v. Superman” was dark, just look at the movies in the rest of the box office rankings — tons of the kind of horror, thriller, action and genre fare that tend to dominate during the times of year before the big movie seasons start. Currently, the only other comedies in the Top 10 are pretty … vanilla: the kid-skewing “Zootopia” and “My Big Fat Greek Wedding 2,” both of which are losing steam after several weeks.

Adults want to laugh, and this weekend, there was really only one big R-rated choice for them. As Dergarabedian said of McCarthy’s rabid fans, “They just love her brash, vulgar, throw-vanity-to-the-wind attitude.” No other film was going to give them that.

5. “Ghostbusters” Should Be YUGE

Let’s put this simply: McCarthy is on a roll. While her CBS sitcom, “Mike & Molly,” ends its six-season run on May 16, that finale comes at an opportune time, when her big-screen star is still rising. Indeed, she has accomplished what few actors — men or women, comedic or serious — have been able to do, in moving from character roles and a TV show to consistent theatrical box office success.

“It used to be if you were a TV star, you didn’t really have a chance on the big screen,” Dergarabedian said. “Now, seeing stars going back and forth between both platforms effortlessly, there’s no stigma anymore.”

Seconded Universal’s Carpou, “She’s a genuine movie star, and a genuine comedic movie star, too.” He added, “And as a fan, I want her to do more.”

While this bodes well for McCarthy’s own long-term plans, it must put a smile on the faces of the folks at Sony, which is releasing the McCarthy-fronted ensemble comedy remake “Ghostbusters” on July 15.

Yep, today, they have good reason to say: “I ain’t afraid of no box office.”